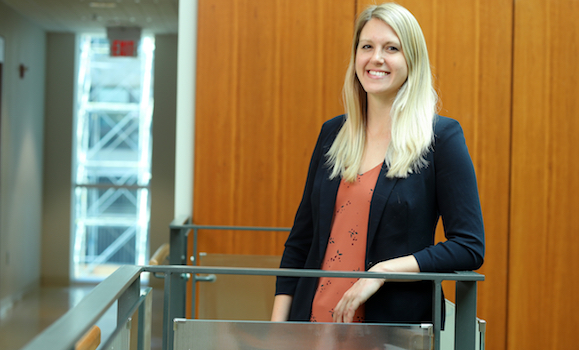 Master of Resource & Environmental Management graduate Simone Charron is passionate about climate change solutions. “I’m really interested in how we shift our major systems, like energy production, transportation, buildings, waste and so on, to minimize resource strain and greenhouse gases,” she says.

Before coming to Dalhousie, Simone completed her undergraduate degree in environmental engineering at Carleton University. While there, she volunteered with Engineers Without Borders Canada, where she was exposed to what she refers to as “outside-the-box engineering”—learning how hard and soft skills acquired through her education could be applied to address greater social and environmental problems. “That’s when I first got interested in policy issues, but I didn’t really know it at the time,” she says.

Since graduating from Carleton, Simone has worked in government and at an engineering firm. “I was working for the Canadian High Arctic Research Station project with Indigenous and Northern Affairs Canada (now under a new name, CIRNAC). The project exposed me to some of the greater challenges around climate change, which gave me the same taste for working on broader issues that I got when I volunteered with Engineers Without Borders,” she says.

Simone decided to go back to school to rebrand herself. She valued what she had learned through her engineering education but realized that policy is the right place for her.

Unlike many programs in the field, the MREM is course-based, with a four-month internship. The flexibility appealed to Simone: “I got really excited about it. I was able to tailor elements of the program to my own interests, which allowed me to explore topics and figure out where I wanted to take my career.” She also admits that she was more than happy to move to Halifax for the program: “I’m from Fredericton and I was really excited to come back to the east coast.”

Simone developed an interest in carbon pricing during her MREM internship with Environment Canada in Ottawa and decided to study it further for her final research paper. “By the time I came out of the program I had learned a lot about it. Then a position opened up with Nova Scotia Environment’s climate change unit, working on carbon pricing. So I was like, this job is awesome!” she says.

One of Simone’s favourite things about MREM is the small size of her cohort. “I kind of found my people. People that I could have really interesting conversations with, who were interested in the same things I was,” she says. The friendships she cultivated are now valuable contacts within her field. “It’s neat to have this network of people that I can keep up with where they continue to help each other out.”

Simone is currently working for Nova Scotia Environment. In her spare time, you can find her riding her bike or playing ultimate frisbee.