Dal.ca Home
Faculty of Management
Home
School of Public Administration
News & Events
News
2019
May 2019
The internship was what really sold me on it”: MPA grad Nora Allen sees great value in real‑world experience

The internship was what really sold me on it”: MPA grad Nora Allen sees great value in real‑world experience 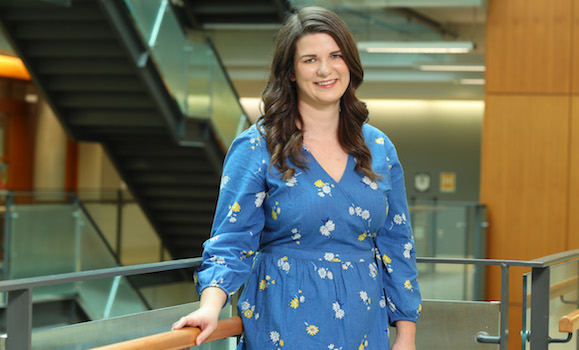 For Nora Allen, the Internship opportunity was the key factor in her decision to pursue a Dal MPA (Nick Pearce photo)

New graduate Nora Allen points to the Master of Public Administration (MPA) Internship opportunity as the key factor in her decision to pursue an MPA at Dal.

Nora grew up in Victoria, British Columbia, and earned a Bachelor of Arts in Sociology at Acadia University. “I’d been really involved in policy development at Acadia, was a resident assistant, and did some policy stuff with the sociology department as well,” she explains. She started pursuing a law degree, but after a year she knew it wasn’t for her.

“When I realized that law wasn’t what I wanted to do, I started to look around Dal and I was really drawn to the MPA program because it gave me background on policy development rather than just policy enforcement. The internship was what really sold me on it.”

Nora interned with the Department of National Defence and continues to work there part time. “I work for the 5th Canadian Division of the Canadian Army in its personnel management branch doing HR planning. I helped develop a lot of the regional HR policies and directives to guide Army people in managing their civilian employees,” she explains. “It was very eye-opening.”

“I also worked with the Honorary Colonel for the Division. Each regiment has an Honorary Colonel (HCol) and Honorary Lieutenant Colonel (HLCol),” adds Nora. They work behind the scenes and provide connection between the community and the Canadian Forces. “They usually come from the community and often represent employers of reservists. Last summer and fall, I helped organize councils for the HCols and HLCols.”

For the past year, Nora served as treasurer for the Public Administration Students Society. “This was new for me. I’d never managed anyone’s finances other than my own. I played a stewardship role to make sure there was enough money and resources for the next team. It was challenging and rewarding.” She also worked as a research assistant for Dr. Jenny Baechler.

The best part of Nora’s time at Dal? “The people I met. Dalhousie draws people from a lot of places and different backgrounds across the country. I definitely got some lifelong friends out of it.”

Nora’s future plans include staying in the Atlantic Provinces. She and her fiancé, who is already working in St. John’s, Newfoundland, just bought a house there.

Nora already has at least one part of her Maritime identity firmly in place. “My family makes fun of me,” she says, laughing. “They say I have an accent now.”