Posted by Rowe School of Business on October 13, 2015 in Students, News, Awards 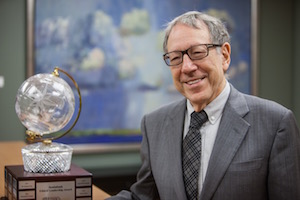 A champion of human rights who is a Member of the Canadian Parliament, Emeritus Professor of Law at McGill University, former Minister of Justice and Attorney General of Canada and an international human rights lawyer is the recipient of the third annual Scotiabank Ethical Leadership Award. The award will be presented at the opening ceremonies of the Ethics in Action case competition and conference to be held at Dalhousie University’s Rowe School of Business on November 6.

Award recipient Irwin Cotler, P.C., O.C., M.P., has received many other honours including 11 honorary doctorates, where he has been recognized as “a scholar and advocate of international stature” (as cited in his various honorary doctorates). He has been named an Officer of the Order of Canada, Canada’s highest civilian award and is the recipient also of the Queen Elizabeth II Diamond Jubilee Medal. He has recently been awarded the Canadian Bar Association’s President’s Award; was the first Canadian recipient of the International Raoul Wallenberg Foundation’s Centennial Medal; the first recipient of the Roméo Dallaire Award for Human Rights Leadership; the recipient of the Sir Muhammad Zafrulla Khan Award for Distinguished Public Service; and one of the recipients of the 2015 Sergei Magnitsky Human Rights Award.

“The Scotiabank Ethics in Action Ethical Leadership Award recognizes exceptional ethical leaders from across Canada – those who, through their actions and decisions, made with respect to either a single, significant event, or over the course of their career, have demonstrated character, courage and ethical principles,” said Bertrum MacDonald, Interim Dean, Faculty of Management. “This award is adjudicated by student leaders from our four Schools. Irwin Cotler’s nomination stood out for his tireless, career-long efforts to advance human rights that has transformed the lives of many at home and abroad.”

“I am very moved – and humbled – by this award, especially as the adjudication is done by Dalhousie University student leaders. In particular, the student focus on ethical principles and ethical leadership recalls my own parents’ value system and their injunction to me that ‘the pursuit of justice is equal to all the other commandments combined – and this is what you must teach onto the generations’. I am honoured that succeeding generations are reflecting and representing these principles”, said Professor Cotler upon being notified of the award.

As Minister of Justice and Attorney General, Irwin Cotler initiated the first-ever comprehensive reform of the Supreme Court appointment process and helped make it the most gender-representative Supreme Court in the world; appointed the first-ever aboriginal and visible minority justices to the Ontario Court of Appeal; initiated the first-ever law on human trafficking; crafted the Civil Marriage Act, the first-ever legislation to grant marriage equality to gays and lesbians; issued Canada’s first National Justice Initiative Against Racism and Hate; quashed more wrongful convictions in a single year than any prior Minister, and made the pursuit of international justice a government priority.

An international human rights lawyer, Professor Cotler has served as counsel to prisoners of conscience including Andrei Sakharov and Nathan Sharansky (former Soviet Union), Nelson Mandela (South Africa), Jacobo Timmerman (Latin America), Prof. Saad Eddin Ibrahim (Egypt) and he was Chair of the International Commission of Inquiry into the Fate and Whereabouts of Raoul Wallenberg. He is a Member of the International Legal Team of Chinese Nobel Peace Laureate Liu Xiaobo, and more recently became international legal counsel to imprisoned Saudi blogger Raif Badawi, Venezuelan political prisoner Leopoldo López, and Shi’ite cleric Ayatollah Boroujerdi in Iran. A feature article on him in Canada’s national news magazine – Maclean’s – referred to him as “counsel for the oppressed”, while the Oslo Freedom Forum characterized him as “freedom’s counsel.”

The Scotiabank Ethics in Action Ethical Leadership Award recognizes a Canadian leader from a corporate, non-profit or government organization who has demonstrated outstanding ethical leadership within an organization and maintained this leadership in the face of challenging situations that held serious implications and consequences for both the organization and its stakeholders. In 2013, the inaugural award was presented to co-recipients Sir Graham Day and Chief Phil Fontaine and Richard Pound was chosen to receive it in 2014.

Ethics in Action provides business students with three ways to participate. A national contest awards prizes for the best video and written essays on the topic of ethical leadership. The student conference will be held in conjunction with the case competition November 6 & 7, 2015, at the Dalhousie campus.

The Rowe School of Business established Ethics in Action with a $1.5 million donation from Scotiabank. The student-led program is aimed at engaging business students and the Canadian business community in shaping ethical business leadership. The program is built upon the success of the Dalhousie Business Ethics Case Competition, which attracted teams of undergraduate business students from top U.S. and Canadian schools for nine years.