Dalhousie chapter of DECA opens with a bang

Posted by Miriam Breslow on February 8, 2017 in News

The team representing Dalhousie at the DECA U Provincial Conference, 2017

After a fast-paced weekend, Rowe School students brought home two awards from the annual DECA U Provincial Conference in Toronto. Eryn Green, a second-year commerce student and president of Dalhousie DECA, accepted the New Chapter Award and the Largest Chapter Provincial Participation Award. “It was incredible to cross that stage to accept awards for our chapter,” says Green. “Our delegates worked hard all year and, boy, did it pay off!”

Green, also a member of the Dalhousie Investment Society and the Dalhousie Commerce Society, founded the Dalhousie chapter of DECA U less than a year ago. “Last summer I got a call from my friend Jake, who is the current president of DECA U Ontario,” says Green. “He told me that the organization was trying to expand nationally, and he asked if I would be interested in heading up a Dal chapter.”

DECA U, explains Green, is Canada’s largest undergraduate business association. Based in Ontario, it now has a few chapters in Western Canada and Dalhousie’s in the East. DECA also operates in high schools (Green was involved as a high school student), and runs the International Career Development Conference (ICDC) in the U.S. for teams from all over the world. Closer to home, the annual Toronto event makes a big impact on students, says Green. “The conference is a great chance for delegates to try their hand at case competitions, meet like-minded students from across Canada, and network with employers from all kinds of industries,” she says. The conference gathers about 1300 students and 150 networking professionals.

Running the Dalhousie chapter has been hard but rewarding work, says Green. “It’s hard to start a new case team at a school where we already have a really successful one,” she explains, referring to JDCC, another undergraduate conference. “It was really intimidating at first. But everyone was very helpful and open to the idea of DECA, which was unexpected because it’s never been on the east coast before.” Green credits her executive team, Brooke Kennedy and Ryan Tran, with being essential to the society: “They’re two of the most dedicated people I’ve ever met.” 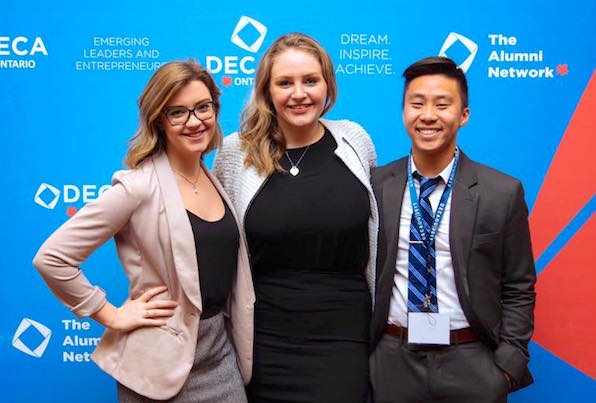 Dalhousie DECA gained members fast. “We sent 24 members competing in 28 events to the provincial conference,” says Green. “One of our awards was for the Largest Provincial Participation, for sending over 90% of our members.” This is especially impressive, notes Green, considering that the students had to fly to Ontario for the event, unlike most of the other schools.

“People were impressed when we told them we were from Dalhousie,” she says. “They didn’t expect people to come so far.” Green expresses great pride in the Rowe School’s delegates for their professionalism, kindness and eagerness to represent Dalhousie.

Green is already looking forward to next year’s conference. While the first year of running Dalhousie DECA involved some trial and error, she says, “I hope to bring even more members to provincials next year and also implement a new training program that will hopefully allow us to take home even more medals.”

While she won’t be leading the chapter next year due to her commerce co-op, she has gained lots of information to pass on to her successor. And she plans on competing herself, having been inspired by the delegates’ performance this year. “I’m very proud of our delegates, whether they won a medal or not,” she says. “They represented our school in the best way possible and I’m happy to say that now all of the Ontario schools know that Dal is a force to be reckoned with.”