Posted by Miriam Breslow on January 22, 2016 in Students, News, Awards 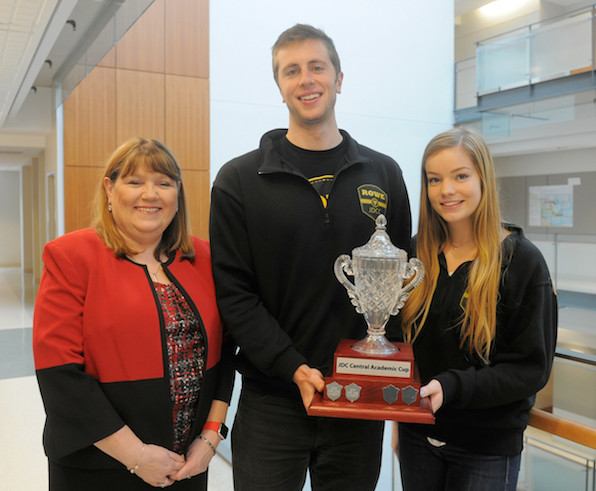 “It was the best feeling I’ve ever had,” says Nicholas Boole, co-captain of the 2016 Rowe School of Business JDC Central team. He’s talking about the moment the team learned it had won the case competition’s Academic Cup. The Rowe School has a history of strong performance at JDCC, but this year the team outdid itself.

JDCC, the largest competition of its kind in Eastern Canada, has been running since 2010. Under strict rules, undergraduate business students participate in case competitions in eight academic streams as well as in categories such as sports and debate. The case competition moves from city to city; this year, the Canadian Association of Business Schools hosted the event in Toronto. The Rowe team, made up of approximately 40 students, made the long bus trip to compete against 13 schools from Ontario, Quebec and the Maritimes. It was a weekend of presentations requiring focus, preparation and energy. The event culminated in an awards ceremony at the closing gala.

Boole and Casey Gallagher, co-captains, recall the gala announcement. “Everyone was cheering around Casey and me and it took me a minute to be, like, ‘yeah, this actually happened,’” says Boole. Gallagher remarks, “They had to play our song three times because we wouldn’t get off the stage. They took a picture that was only supposed to be Nick and me, but the whole team joined us.”

Team spirit was a theme for the Rowe School in this year’s competition. “This was the tightest team we’ve ever been a part of,” says Boole. “Everyone had each other’s backs.” Team members came to all events to support each other, says Gallagher, filling the presentation rooms.

Gallagher and Boole, both in the fourth year of Commerce degrees, had participated in JDCC in the past, but this was their first year as captains. Gallagher explains her motivation to lead the team: “I competed two years ago on the Business Strategy team and we won. It really changed my university career and my professional career. It still comes up in every job interview. And I thought since I’d had that success I could bring it to others, because I know what it takes to get to the top.” Boole initially came to JDCC as a basketball player competing in the sports category, and loved the way the event combines competitiveness with support of other schools. “I wanted to become captain to take Dal to the next level,” he says.

Take it to the next level they did. Besides winning the overall Academic—a first for the Rowe School—its Marketing team placed first in its stream and the Business Strategy team placed third. In addition, Rowe student Adrian Hutcheson was named JDCC Volunteer of the Year, and the Rowe sports team won the Sportsmanship Award.

Dr. Florence Tarrant, faculty advisor to the team, accompanied the students to Toronto. “I am very proud of them,” she says. “They were very well prepared and presented their cases with confidence and poise.” Tarrant notes that nine Rowe students were invited by judges and sponsors to a VIP reception, and that the weekend resulted in preliminary job interviews for some students. “It just goes to show what type of people we have at this school,” says Gallagher proudly. “They come off as level-headed and interesting with great networking and social skills.” As Tarrant puts it, “These students clearly demonstrated this weekend why they are the future leaders of business.”

Tarrant thanks the Rowe faculty and staff who helped to prepare the students over the past four months. “To the academic team coaches,” she says, “the students want to say a great big thank you for all of your coaching, mentoring and support. They couldn’t have done it without you.” Boole echoes this sentiment. The captains are especially grateful to Tarrant herself: “Not only did she coach two teams, she was present as much as she could be,” says Gallagher, who refers to Tarrant as a lifesaver.

After nine months of work—the co-captains started the administrative side of their job last May—and one exhausting weekend during which they got about six hours of sleep—Boole and Gallagher are grateful not only to the faculty, but also to the team itself. “Nick and I are getting a lot of recognition right now, but it was really them too at the end of the day,” says Gallagher. Boole says that being a captain was the most rewarding experience he’s ever had. “Everyone on the team got along like they were best friends,” he says. “It was amazing to see. Our success was the result of a team effort. The countless hours of hard work of all of the Rowe competitors, from sports to debate to the academic streams, shone through in that academic cup.”