Grad profile: A degree for all fields 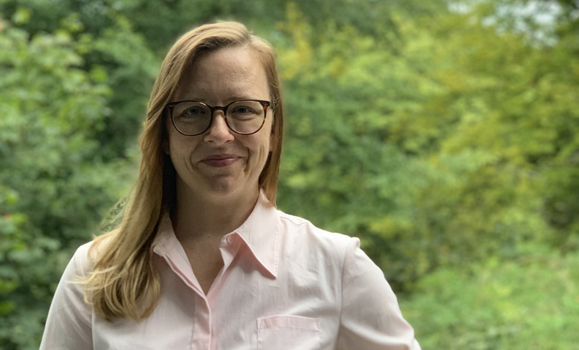 When Amy Hak says, “I’m probably not your normal student,” it just might be the understatement of the year. Hak graduates with a Master of Information Management (MIM) this fall and is already putting her new knowledge and skills to work in her role as a forensic officer in the Forensic Science Section (FSS) of the Office of the Prosecutor of the International Criminal Court (ICC) in The Hague, Netherlands.

Originally from Minnesota, Hak earned a Bachelor of Arts degree from Hamline University in Saint Paul, majoring in biology and minoring in anthropology. “I had envisioned being a vet, but I attended a talk on forensic anthropology and immediately decided to change my career path to forensic science. It was before CSI, so that’s dating me,” she laughs. “The OJ Simpson trial and verdict also happened while I was at Hamline, which put a spotlight on forensic science.”

After completing a post-baccalaureate forensic science certificate, Hak started working as a civilian forensic scientist with the Minneapolis Police Department.“I responded to crime scenes and was a latent fingerprint examiner. I was encouraged to specialize in an emerging forensic science field, so I chose forensic video analysis.”

In 2006, Hak became certified in forensic video analysis and in 2009 moved to Calgary to be with her Dutch-Canadian husband.

“In Canada, civilians don’t work on crime scenes,” she explains, “but it just happened that the Calgary Police Service employed forensic video analysts, so I started working full-time in the Technical Crimes Unit.”

Hak also started her own consulting business, ALH Forensic Video Analysis. “The influx of digital video, audio and multi-media evidence led me to want to do an information management (IM) degree. The volume of this type of evidence was becoming a monster for law enforcement agencies because everyone has a video camera on their cell phone, surveillance cameras are everywhere, and the technology is constantly changing, with things like deep fake videos and artificial intelligence.”

Dal’s blended/online industry-focused MIM program builds on students’ existing knowledge and experience to develop critical information, risk and change management skills. The degree is the first of its kind in Canada, and was a perfect fit for Hak.

“I was blown away! The professors really helped me understand how IM was so important to my field. I work with surveillance video, so understanding privacy issues was one of the bigger topics for me, especially with the introduction of facial recognition and body-worn police cameras. I’m now using my IM skills and writing information policy here for the FSS. I use my degree every day! I invested wisely, that’s for sure.”

Hak’s MIM capstone project centred on the ICC’s e-court, a system that shares information digitally among the prosecution, defense and trial chambers. “I completed a program evaluation of the redaction process because it safeguards the integrity of investigations and the personal information of staff and witnesses.”

The ICC investigates and tries people charged with genocide, war crimes, crimes against humanity, and the crime of aggression. “I was hired to assist with forensic video analysis. Our investigations involve a lot of open-source video. It’s imperative to have someone who understands video technology and can accurately analyze and present it in court. I perform image comparison analysis to verify locations, or to narrow down identifications or exclusions of people in the videos by comparing clothing and other objects.”

Because she took on her ICC forensic officer role in May 2018, Hak was doing the job concurrently with her MIM. “It was difficult to say the least,” she says. “I’ve actually been able to see some of Den Haag now that I’m finished. My husband’s parents are from here, so it’s really nice to be living here.”

Hak’s advice to anyone considering pursuing an MIM? “Information management applies to every field! My colleagues in the courses were from vastly different fields, but we all need to deal with information efficiently and effectively.”