Posted by Jane Doucet on September 7, 2017 in News 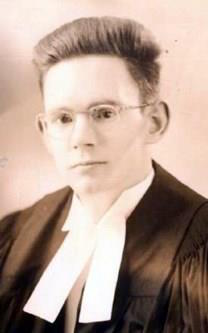 The Schulich School of Law extends its sincere condolences to the family, friends, and former colleagues of Charles “Charlie” William MacIntosh, QC (LLB ’52), who died on Aug. 30 in Halifax at the age of 88. MacIntosh, who was the father of Schulich Law Professor Constance MacIntosh, was considered the legal property expert in Nova Scotia.

After earning his LLB from Dalhousie University, MacIntosh was called to the Bar in 1953 and appointed to Queen’s Council in 1968. He was a senior partner with Pace, MacIntosh and Donahoe from 1961 to 1974. While he was a lawyer, he was concerned about equality in the legal profession; he helped many young Nova Scotian women start legal careers.

In 1975 MacIntosh began working for the Council of Maritime Premiers and became the director of legal services for the newly formed Land Registration and Information Services, where he oversaw the development, formation, and implementation of the land titles system. From 1988 until recently, he authored the Nova Scotia Real Property Practice Manual.

At the age of 62, in 1990, MacIntosh retired from government to become Corporate Secretary/Corporate General Council for the Armour Group. He worked with Armour Group and private clients until a few years ago.

In September of 2014, MacIntosh received recognition for 60 years of having been called to the Nova Scotia Bar. He was active in many community groups, including the Halifax Club, the Canadian Micrographic Society, the North British Society, the Commercial Club of Halifax, Heart for Life, and the Officers Mess.

MacIntosh was also an active member of the Nova Scotia Barristers Society and held positions on many committees during the course of his career. He and his wife of 53 years, Geraldine, who died in June, were well known for “dancing the night away at N.S. Bar Association conferences, according to her obituary.

As Gavin Giles wrote in the “Feedback” section of the Sept. 5 edition of AllNovaScotia.com, MacIntosh was a “lawyer’s lawyer” and “A pure practioner. Devoid of flash. Intellecturally curious. Always seeking answers which were right because they were logical, and fair.” Past colleagues have called him “a real gentleman” and “a quintessential lawyer.”

MacIntosh was pre-deceased by his wife, Geraldine. He is survived by his three children, Sandy (Debbie), Constance (Brian), and Donald (Heather); six grandchildren, Rebecca, Shannon, Brenna, Cole, Logan and Rhys; and several cousins.