A look back in time at Lucy Maud Montgomery's Dalhousie 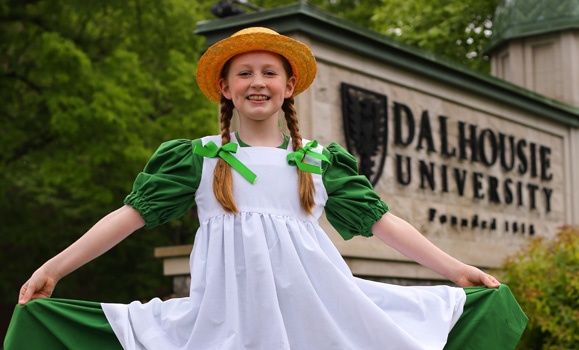 Lucy Maud Montgomery scrimped and saved to study at Dalhousie College, starting classes in what is now the Forrest Building in the fall of 1895.

The woman who was to become one of Canada’s most well-known authors had a thirst for knowledge; she came to Dal excited to learn and to perfect her emerging and considerable writing talent.

Now, the Faculty of Health has formally recognized this connection with a plaque in the lobby of the historic Forrest Building. 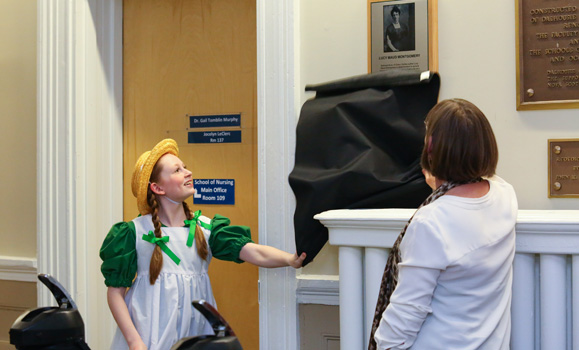 On Monday, June 18, Dr. Gail Tomblin Murphy, director of the School of Nursing, and Dr. Cheryl Hubley-Kozey, dean of the Faculty of Health (Acting), welcomed guests who braved the rain to hear about the beloved author’s time spent at Dal. 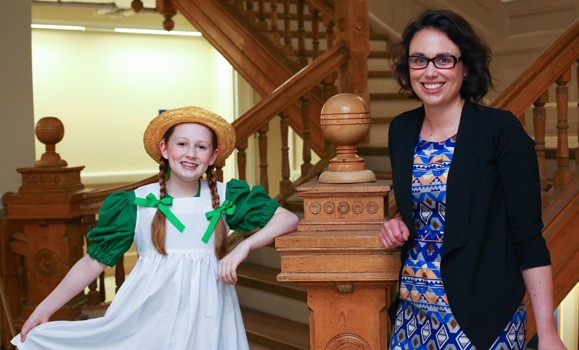 Dr. Scarth, a Dal grad (BA English), said Montgomery looked fondly upon her time at Dalhousie, highly valuing the chance to further her studies even though she could only afford to attend Dalhousie for one year. Montgomery fictionalized Dalhousie as Redmond College in her novel Anne of the Island, and Halifax became known as the city of Kingsport.

“It can be fun detective work going through the novel and trying to place Halifax landmarks,” said Dr. Scarth.

Although the famed writer’s time at Dal was short, she created through her character, Anne Shirley, the support for educational pursuits that she herself was unable to find. 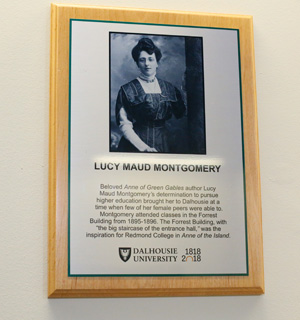 “To attend Dalhousie, Montgomery had to go against popular opinion back home, as her grandfather and the neighbours in her rural community did not believe in women being educated,” Dr. Scarth said, noting that Anne was able to return to Green Gables with her full Bachelor of Arts degree.

Dr. Scarth said that despite common attitudes at the time, Dalhousie itself was a welcoming place for women. “Post-secondary education was a rare attainment for women back then, but Dal took an inclusive position — actively advertising to attract female students.”

Montgomery’s connection to Dalhousie is now formally recognized with a plaque in the lobby of the Forrest Building, near the staircase where she once travelled on her way to and from the classes she loved.