Killam Scholars at Dalhousie make groundbreaking research advances that have shaped everything from immigration policy, to cancer treatment; world economics, to law and literature. Focused on enabling our brightest minds to make significant contributions to their chosen field, Killam scholarships and fellowships provide the resources researchers need to realize their goals.

Created by a 1967 bequest from Izaak Walton Killam and Dorothy J. Killam, the Killam Trust endowment at Dalhousie has grown to more than $140-million and benefited more than 1,800 graduate students and postdoctoral fellows over the past half century.

Learn more about the history of the Killam Trust 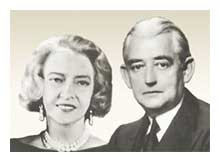 A legacy of impact

When Izaak Killam died in 1955, Dorothy Killam continued to build the Killam fortune. When she died in 1965, she left almost $100 million – $450 million in today’s market – to higher education in Canada. Her Will outlined the creation of the Killam Trusts, established to fund graduate and postgraduate scholarships and fellowships, as well as a range of other scholarly activities at specific Canadian universities.

“My purpose in establishing the Killam Trusts is to help in the building of Canada’s future by encouraging advanced study. Thereby I hope, in some measure, to increase the scientific and scholastic attainments of Canadians, to develop and expand the work of Canadian universities, and to promote sympathetic understanding between Canadians and the peoples of other countries.” —From the will of Dorothy J. Killam, 1965

Izaak Walton Killam Memorial Scholarships are the most prestigious graduate awards administered by Dalhousie University. These awards are offered in support of studies in programs requiring a thesis and leading toward either a master’s or doctoral degree. The scholarships are tenable for two years for master’s candidates and up to four years for doctoral candidates.
Learn more

Trading a lab coat for a camera

Dietician and PhD student Phillip Joy got out of the lab to take an arts-based approach to looking at what shapes the nutritional practices and body images of gay men.

Dietician and PhD student Phillip Joy got out of the lab to take an arts-based approach to looking at what shapes the nutritional practices and body images of gay men.

Getting the lead out of drinking water

How safe is the water we drink? Through field and lab work, PhD student Bofu Li studies ways to lower the amount of lead in drinking water.

How safe is the water we drink? Through field and lab work, PhD student Bofu Li studies ways to lower the amount of lead in drinking water.

The Killam Trusts at Dalhousie supports key activities at the university designed to enhance research and teaching impact including:

The Killam Memorial Chairs are academics of the highest distinction and are appointed for five-year terms by a committee chaired by the Provost and the Vice President Research.  Each Killam Memorial Chair at Dalhousie is expected to be a senior research leader and to pursue a research program that advances University and Faculty research priorities; as well as presenting a highly positive profile for research both internally and externally.

Renewal will be considered upon the recommendation of the Dean of the Faculty involved, similar to the request for a new Chair. The awards provide salary relief to a maximum of $100,000 with an additional Faculty commitment of a minimum of $25,000 towards research funding.

The Faculty of Science Killam Prize was established in 1994/95 by the Faculty of Science of Dalhousie University in recognition of the financial support provided to the Faculty by the Killam Endowment. One prize is awarded annually to enhance the careers of the most promising scientists in the Faculty of Science who have obtained their doctorate within the preceding eleven years. The winners must demonstrate exceptional research ability through their contributions to scientific knowledge. The prize is accompanied by an award of $2,000.

These Prizes are awarded annually to the most outstanding Killam Memorial Scholarship recipients, the top ranked Master's and top ranked Doctoral award winner.

Recipients receive a cash prize of $2,500 and a certificate of acknowledgement.  Recipients are selected based on academic achievement, a research proposal, letters of recommendation and leadership qualities.