Competition dates: March 15 and October 31 each year
A bursary of at least $2,000 will be awarded at each competition 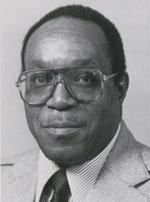 Dr. P. Anthony Johnstone was born in Kingston, Jamaica. He received his education at St. George's College in Kingston, Madrid University, The University of the West Indies, Dalhousie University and the University of Ottawa. During his career, he taught at Dalhousie University. In 1975 he joined the Nova Scotia Department of Education as Provincial Coordinator of Ethnic Services, with responsibility for ethnic and cultural services, multicultural education and the development of human rights education. In 1985, he was appointed Executive Director of the Nova Scotia Human Rights Commission, a position he held until his death on July 30, 1989. During his career, he argued strenuously and persuasively for social justice, progressive multiculturalism, meaningful internationalism and serviceable human rights.

This fund is used to assist a humanities or social science graduate student who has a record of interest and involvement in social justice and human rights. Award recipients also receive a copy of The Life & Thoughts of Tony Johnstone, (Ed.) Reverend Trevor Phillips.

The recipient must have demonstrated financial need, satisfactory academic standing, and an involvement in the areas of social justice and human rights. Applications or nominations should include a letter demonstrating their involvement in these areas.