Posted by Engineering Communications on May 15, 2019 in News
Designed by a team of Dalhousie Students, this wheelchair-mounted biomechanical arm assistant allows individuals with reduced arm strength to regain mobility and function.

The 22-year-old suffers from Duchenne Muscular Dystrophy (DMD), a genetic disorder characterised by the progressive loss of voluntary muscle movement. Although he uses a wheelchair to navigate through his everyday life, he recently received some extra support from four friends in the Faculty of Engineering at Dalhousie University.

They designed what they call a biomechanical arm assist, a portable device intended to attach onto Picard’s wheelchair and assist with everyday tasks.

These tasks include eating and drinking, which have become a challenge for Picard who struggles to lift his arm past his shoulder.

Picard was diagnosed with DMD at the age of six. The severe condition, which is more prevalent in men, is caused by an absence of dystrophin, a protein that helps keep muscles cells intact. Muscle loss often begins as early as the age of 3, affecting the hips, pelvic area, thighs and shoulders, and later the skeletal muscles in the arms and legs.

“We saw his condition progress throughout elementary school, junior high school and high school,” says Galbraith who grew up in Mount Uniacke, Nova Scotia with Picard.

Although the two attended the same schools, Galbraith says he never really became close with Picard until after high school. Their friendship was sparked through a love of gaming.

“We started playing Overwatch together, which is a video game,” recalls Galbraith. “We went to tournaments together and had a group of friends that we hung out with. A couple of times a year we’d try and get together to have gaming parties such as Mario Kart.”

It was at one of these parties where Galbraith really noticed some of the basic challenges Picard faced each day. While everyone sat on the couch enjoying a slice of pizza, Galbraith said he watched as Picard struggled to lift his slice of pizza to his mouth.

“Nate had to go over to the table and bend down to the level of the table so that he could eat,” recalls Galbraith. “It was at that point when I realized that I wanted to do something for him that would help him better manage his daily tasks.”

With the Capstone Project already on his mind, Galbraith teamed up with his mechanical engineering classmates to build Picard a biomechanical arm assist. 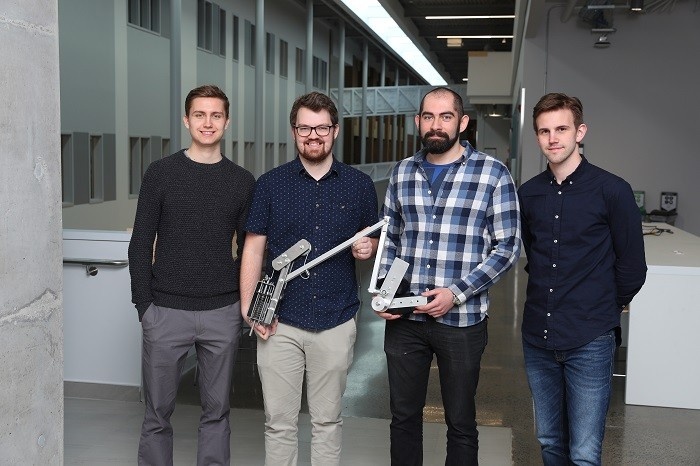 From Concept to Design

Senior students in the Faculty of Engineering are required to undertake a Capstone Course in their final year of studies. The course, which promotes design and innovation, is the culmination of four years of studies and provides students with the opportunity to blend academic knowledge and experiences to tackle real-world problems.

While most student teams are partnered with members of industry and presented with a current problem they’re required to solve, some teams are able to pitch their own Capstone Project ideas.

“I’d always been interested in prosthetics and trying to mix medical and engineering together, so I really I wanted to do that with my Capstone Project,” says Galbraith.

After examining Picard’s arm strength and manoeuvrability, the team learned that they’d need to develop a device to assist with his elbow flexion, which is the contraction and extension of the arm at the elbow. The elbow flexion is primarily supported by the biceps brachii, which is an upper arm muscles that is greatly weakened in people who suffer from DMD.

“We’re making his arm weightless, so that when he wants to lift a slice of pizza, the only weight he actually has to carry is the weight of the pizza, which is less than a pound,” says Galbraith “His main problem right now is that he can’t lift his own arm up which is about 10 pounds or so.”

The arm assist is mounted to the side of Picard’s wheelchair, and spring-loaded to counteract the weight of his arm. The team says once strapped to the wheelchair, the device can be appropriately tuned to adjust to Picard’s weight.

“So if we can take a mechanise that supports his arm, and the springs inside the mechanise support the weight of his arm, he can use those to push his arm up,” explains Galbraith

“When Nate slips his arm into the device, we also want to be able to adjust exactly how much weight we’re assisting, just to make it perfectly balance his arm,” adds teammate Parsons. “And it’s also beneficial in case Nate’s condition continues to progress.”

When originally researching the concept and feasibility of their Capstone Project, Parsons says the team was surprised to discover that many electric wheelchairs currently on the market lack any type of arm support.

“For someone with DMD or other conditions, having full use and control of your arms is a huge aspect of being independent,” says Parsons. “So this is a very important project to look into.”

Although the team is quick to point out that their Capstone Project isn’t designed to change the world, they know that with a bit more hard work and design iterations, they can at least change the life of one good friend.