Royal Recognition: Get to know the five Dal researchers newly appointed to the Royal Society of Canada

Edited from the full article in Dal News.

Five of Dalhousie’s world-class researchers have been recognized by the Royal Society of Canada (RSC) for their outstanding scholarly, scientific and artistic achievement. This includes three new Fellows and two new members of College of New Scholars, Artists and Scientists.

According to the Royal Society of Canada, the Fellows comprise over 2,000 Canadian scholars, artists, and scientists, peer-elected as the best in their field, who are making remarkable contributions in the arts, the humanities and the sciences, as well as in Canadian public life.

Those named to the College represent the emerging generation of scholarly, scientific and artistic leadership in Canada. They address issues of concern to new scholars, artists and scientists, for the advancement of understanding and the benefit of society.

“Congratulations to these five remarkable researchers on their appointment to the Royal Society of Canada,” says Alice Aiken, vice-president research and innovation at Dalhousie. “Their work is exceptional, and they are having a profound impact in our communities and around the globe. We are proud to have them call Dalhousie University home.” 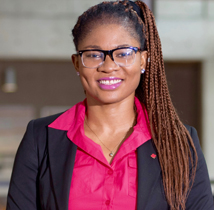 Rita Orji has been recognized globally as one of the leading researchers in Persuasive Technologies and Behaviour Change Systems for her transformative work on Personalizing Persuasive Systems. She utilizes user-centered approaches to design interactive systems to motivate people for actions and causes that are beneficial to them and their communities. She also investigates how interactive systems can be designed for under-served populations.

This year’s cohort will be formally inducted into the Royal Society of Canada in November during the annual Celebration of Excellence and Engagement, which will be held in partnership with the University of Toronto.

For more information, visit the Royal Society of Canada website.