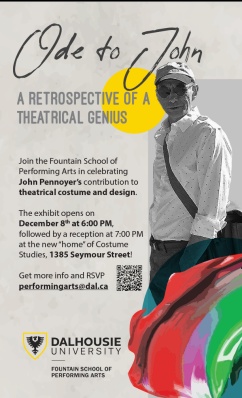 A Retrospective of a Theatrical Genius

Join the Fountain School of Performing Arts in celebrating John Pennoyer’s contribution to theatrical costume and design.
The exhibit opens on December 8th at 6:00 PM, followed by a reception at 7:00 PM at the new “home” of Costume Studies, 1385 Seymour Street!
For more information or to RSVP, visit https://www.eventbrite.ca/e/470059379257 or email performingarts@dal.ca. 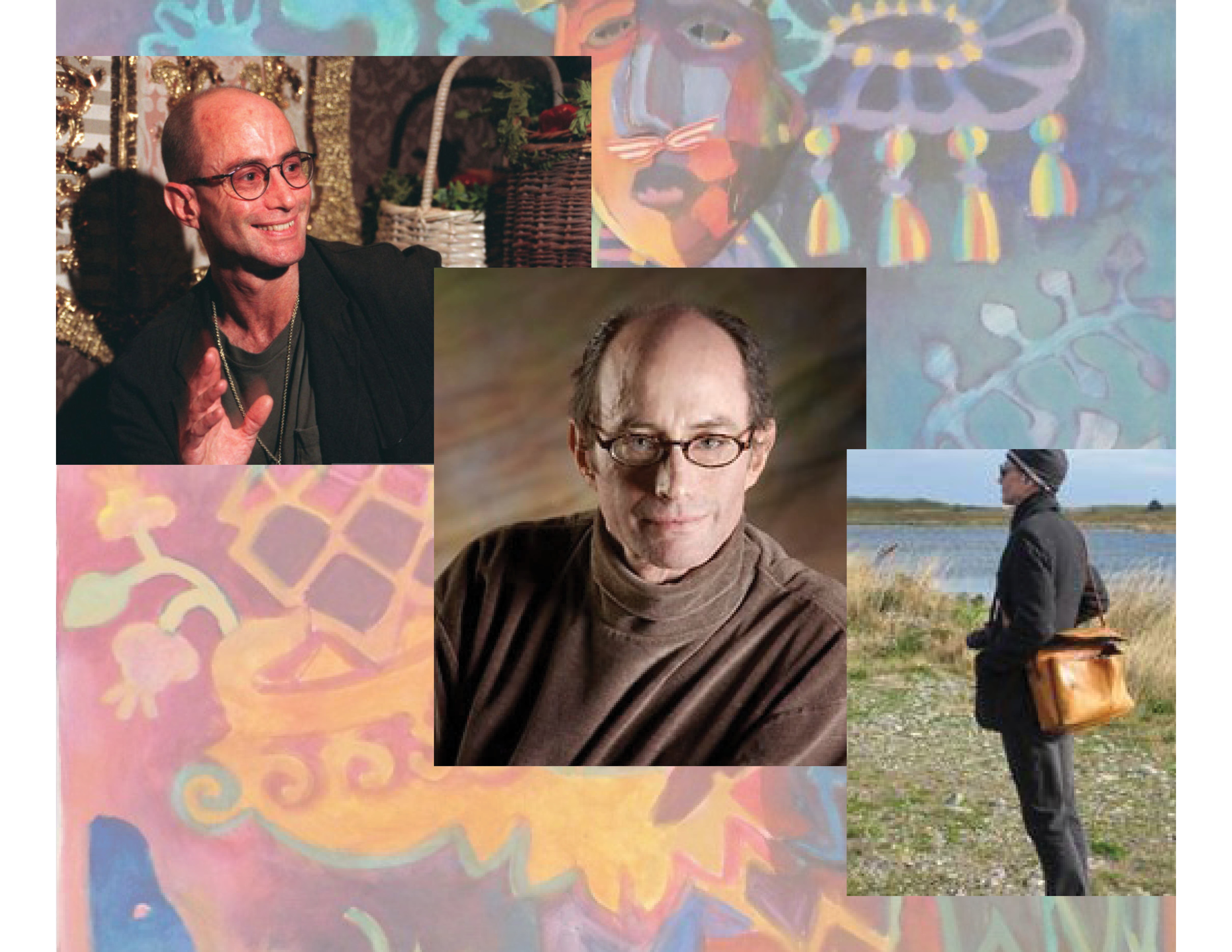 John Pennoyer, one of Canada’s most illustrious stage designers and artists, died peacefully at Victoria General Hospital in Halifax on Thursday, July 29, 2021, at the age of 71. He is survived by his brother Michael Pennoyer and sister-in-law Barbara Pennoyer, his nieces Jolene and Rhiannon Pennoyer, his cousins Cathy Hay and Robert Hay, his aunt Phyllis Hay, and innumerable colleagues and friends.

After receiving his BA from McMaster University, John began his theatrical career as a props apprentice at the Stratford Festival, Ontario, in 1972. Three years and several theatres later, he began design training under Daphne Dare, Stratford’s first Head of Design. John was one of the designers fortunate enough to learn not only from Dare but also from the great Tanya Moiseiwitsch, and he in turn passed his knowledge along to younger generations of designers, creating a continuum of creativity that stretches across Canada and beyond.

John’s first costume design for Stratford was for Robin Phillips’ 1976 production of Hamlet. This was a huge challenge for a young designer, but one to which John rose with breathtaking aplomb. He went on to design a remarkable 35 productions for the Stratford Festival, including among others Ghosts, The Devils, Henry IV Parts 1 & 2, Henry V, Henry VI, A Midsummer Night’s Dream, The Taming of the Shrew, Alice Through the Looking Glass, Love’s Labour’s Lost, Measure for Measure, Pericles, Of Mice and Men, The Merchant of Venice, A Man For All Seasons, The Trojan Women, The Winter’s Tale, Three Sisters, and Twelfth Night, the play that saw his final design for Stratford in 2017. Among John’s many enduring friends and collaborators at Stratford were Marti Maraden, who describes him as an “unfettered imagination, a designer and an artist with a magical connection between thought and hand,” and Martha Henry, who remembers how “he could make a play come to life, reveal it for you, through his genius.”

In September 2011, John took up a position as Lecturer in Costume Studies in the Department of Theatre, subsequently the Fountain School of Performing Arts, at Dalhousie University in Halifax, where he taught until his retirement in 2016. For Dalhousie Theatre and Dalhousie Opera, John designed costumes for 29 productions in the space of only ten years, with a sparkling creative energy that continued unabated after his retirement from teaching. At the time of his death, he was working on designs for a production of The Crucible, which will be realized in Spring 2022. John was deeply respected and loved by his students, one of whom, Emlyn Murray, recalls “the inspiration of his designs. His renderings are so full of detail and creativity, my classmates and I couldn't wait to get started when we received our assignments.” His Dalhousie colleagues and the many directors with whom John worked were likewise profoundly grateful for the privilege of collaborating with such an incomparable artist. Alistair Newton, who worked with John on his last full production, Mary Stuart, in Spring 2021, describes him as the keeper of “a great and vast archive of design knowledge.” In Halifax, John also designed sets for Opera Nova Scotia’s The Abduction from the Seraglio, and sets and costumes for their productions of La Finta Giardiniera and The Gondoliers, as well as for a production of Così Fan Tutte that was delayed by the onset of the pandemic. Opera NS’s artistic director, Walter Kemp, remembers that his design sketches were “artistic gems, which will in themselves keep his legacy green.”

John was a prolific visual artist who worked in a wide range of media, including oil and watercolour painting, digital sketches, prints, paper cutouts, and textile design. Exhibitions of his artwork have been mounted at the Agora Gallery in Stratford, the National Arts Centre, and the Dalhousie Art Gallery, among others.

John’s generosity as a mentor was as exceptional as his artistic talent. At the Stratford Festival, he is fondly remembered for his deep care for his assistants, many of whom have gone on to become exceptional designers themselves. He also had a marvelous rapport with the Festival’s many talented artisans, forging numerous relationships devoted to exceptional work through rich collaboration. At Dalhousie, similarly, he went out of his way to create apprenticeships and other practical opportunities for young artists.

In addition to what Stratford Festival Artistic Director Antoni Cimolino describes as “perhaps the kindest heart in theatre,” John possessed, as Martha Henry remembers, “a wicked, dry sense of humour.” He was a brilliant storyteller and a wry observer of human folly. He was able to find the beautiful and the ridiculous even in the darkest aspects of life and death, and taught this skill by example to those around him. One of his highest terms of praise was to say that something—a beautiful print, an eloquent jazz riff, a chic item of clothing, an electrifying night at the theatre, or a beloved spot in Venice—was “magical.” That word describes him perfectly. His enchanting vision and personality will be deeply missed, but will live in the many hearts and imaginations that he transformed.

By John’s request, there will be no funeral. Donations in his memory may be made to the Fountain School of Performing Arts, Dalhousie University, where they will help to found the John Pennoyer Award to support a gifted upper-level student in the Costume Studies Program. Those who would like to donate are warmly invited to visit www.GIVING.DAL.CA and direct their gifts to “Fountain School of Performing Arts- Costume Studies.”