From a Friendship to a Legacy 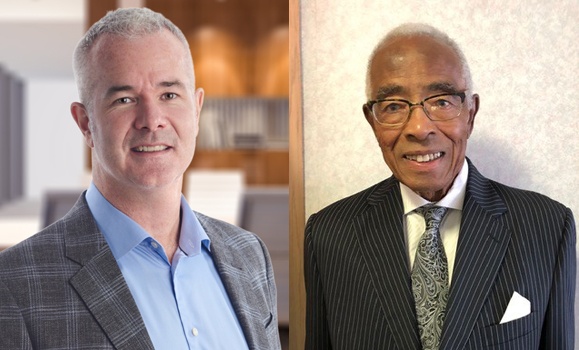 When The Honourable Don Oliver (LLB ‘64), retired Senator, met Wade Dawe at a business conference in 2009, he could not have imagined it would lead to a lifelong friendship, much less a gift made by Dawe to the Dalhousie Performing Arts Campaign in Senator Oliver’s name.

“I know Wade believes in giving back, and he has done amazing things in support of the community, but it still took me by surprise that he thought to do something like this,” says Oliver. “Most people go through life without being touched by that kind of unselfish generosity and I feel very blessed to have him as a friend.”

Dawe, managing director of Brigus Capital, is known for his many philanthropic and volunteer activities, including his role as a fellow with Dalhousie's Creative Destruction Lab. He’s proven to be a true friend not just to Oliver but also to Dalhousie, its students and the community. Now, he’s helping establish the Senator Don Oliver Studio: a new state-of-the-art practice and teaching studio, set to be part of the expanded Dalhousie Arts Centre, designed to inspire musicians to higher levels of creativity and collaboration.

The gift is meant to commemorate Oliver’s extensive ties to Dalhousie, which include his work with the Board of Governors, his tenure as a professor at the Schulich School of Law, bursaries he has supported for visible minorities and his efforts to raise $500,000 to fund the James Robertson Johnston Chair in Black Studies. But it goes beyond that — it’s also acknowledging Oliver’s lifelong connection to the arts, one that starts with his aunt, legendary opera singer Portia White, and extends through his involvement with the National Youth Orchestra of Canada, the Art Gallery of Nova Scotia and Neptune Theatre.

“Art is an essential part of society because the songs, the paintings and the plays that artists create really shape who we are,” Oliver says. “A university like Dalhousie has that impact too, because it shapes our society through the programs it offers. Wade's gift is important in that it helps create best-in-class spaces where students can practice, learn, collaborate and create art that enriches our community.”

Dawe says the campaign provided a perfect opportunity to honour Oliver and the difference he has made in law, government and our province.

“He really has dedicated his life to helping others, in particular advancing causes specifically related to visible minorities in Nova Scotia,” says Dawe. “He’s an incredible individual, and a great friend, and this seemed like the best way to recognize all the amazing work he has done.”

“The new Dalhousie Arts Centre is going to be a centrepiece of the university and the city,” Dawe adds. “More importantly, it creates opportunities for people to pursue their dreams, and when you do that, the potential is limitless. Senator Oliver has done that for others all his life and this gift ensures his legacy will live on.”