The decline of traditional media combined with the proliferation of new modes of communication and information has had dramatic consequences for democratic practices worldwide. While the impact of these new communication technologies has been fundamental to key democratic advances, their ‘dark side’ – including rampant toxicity and incivility, the spread of misinformation, and the amplification and polarization of social and political differences – are a vital feature of the spreading malaise of democratic politics. Nowhere are these dynamics more consequential than in the United States. This has led a growing array of commentators to assert that the November 2022 mid-term elections may be among the most consequential in US history, and that democracy in America may be on the verge of collapse.

Technology, Media Fragmentation, and the Crisis of Democracy in America

The 2022 Stanfield Conversation took place on Thursday, October 20, 2022, within weeks of the US mid-term elections, providing an exceptional opportunity to engage with debates concerning the repercussions of new media and technology-enabled subversive practices for democratic politics. While the focus will be on the deepening crisis of democracy in America, the American experience must also be seen as both reflecting and shaping broader global trends. Because Canada has a unique degree of intimacy and vulnerability in its relations with the US, this year’s outstanding speakers bring diverse Canadian and American perspectives to bear on this critical nexus, including ways of responding to the challenges and threats it presents. 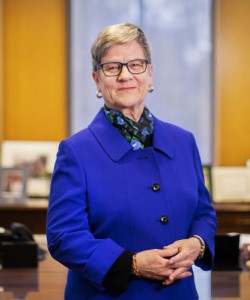 Kathleen Hall Jamieson is the Elizabeth Ware Packard Professor at the Annenberg School for Communication of the University of Pennsylvania and the Walter and Leonore Annenberg Director of the university’s Annenberg Public Policy Center. She has authored or co-authored 17 books, including Creating Conspiracy Beliefs: How Our Thoughts Are Shaped (2022) and Cyberwar: How Russian Hackers and Trolls Helped Elect a President, which won the Association of American Publishers' 2019 R.R. Hawkins Award. In 2022, Jamieson was the recipient of the Warren J. Mitofsky Award for Excellence in Public Opinion Research, and in 2020, the National Academy of Sciences awarded Jamieson its Public Welfare Medal for her “non-partisan crusade to ensure the integrity of facts in public discourse and development of the science of scientific communication to promote public understanding of complex issues.” Jamieson is a member of the American Philosophical Society and the National Academy of Sciences, and a Distinguished Scholar of the National Communication Association. She also is a fellow of the American Academy of Arts and Sciences, the American Association for the Advancement of Science, the American Academy of Political and Social Science, and the International Communication Association, and a past president of the American Academy of Political and Social Science. She is the co-founder of FactCheck.org and its SciCheck project, and director of The Sunnylands Constitution Project, which has produced more than 30 award-winning films on the Constitution for high school students. 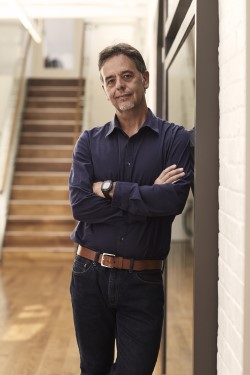 Ronald J. Deibert is Professor of Political Science and Director of the Citizen Lab at the Munk School of Global Affairs and Public Policy, University of Toronto. The Citizen Lab undertakes interdisciplinary research at the intersection of global security, ICTs, and human rights. The research outputs of the Citizen Lab are routinely covered in global media, including over two dozen reports receiving front page coverage in the New York Times, Washington Post, and other media over the last decade. Deibert is the author of Black Code: Surveillance, Privacy, and the Dark Side of the Internet (Random House: 2013), and RESET: Reclaiming the Internet for Civil Society (House of Anansi, 2020) as part of the CBC Massey Lecture series. In 2013, he was appointed to the Order of Ontario and awarded the Queen Elizabeth II Diamond Jubilee medal, for being “among the first to recognize and take measures to mitigate growing threats to communications rights, openness and security worldwide. 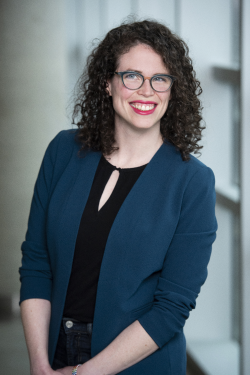 Elizabeth Dubois (PhD, University of Oxford) is an Associate Professor in the Department of Communication and member of the Centre for Law, Technology and Society at the University of Ottawa. Her work examines political uses of digital media including media manipulation, citizen engagement, and artificial intelligence. In 2019, she co-led the Digital Ecosystem Research Challenge which brought together 18 research teams to examine uses of digital media in the 2019 Federal Election in Canada. She leads the multi-disciplinary Pol Comm Tech Lab which includes political scientists, computer scientists, and communication students. She collaborates internationally with non-profits, technology companies, journalists, and academics. She also hosts the Wonks and War Rooms podcast where political communication theory meets on the ground strategy. Her public writing has appeared in Maclean's, The Globe and Mail, the Toronto Star, Policy Options, The Conversation, Salon and been featured in many others. Find her on Twitter @lizdubois, at www.polcommtechlab.ca or check out her latest edited book, Citizenship in a Connected Canada. 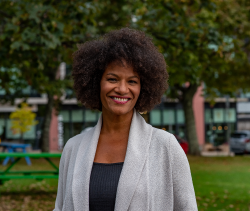 Portia Clark is the host of Information Morning for Mainland Nova Scotia airing from 5:55 a.m. to 8:37 a.m. on CBC Radio One.

Portia is an established journalist with a solid reputation as a trusted interviewer who has covered some of the country's biggest stories throughout her 20-year career with CBC. Her first introduction to the airwaves was working as a reporter, producer and newsreader in Halifax in 1998.

In 2000, she moved west to CBC Edmonton for a news-reading job, which was followed by a year co-hosting the morning show, Edmonton AM. In 2002, she made the switch to television to host Edmonton's supper-hour newscast, CBC News Edmonton. In 2012, she went back to radio to host the Edmonton afternoon current affairs show, Radio Active. She returned home to Nova Scotia with her family in April 2018 to take on the role of host for Information Morning.

Portia has strong roots in rural Nova Scotia and is actively involved her community. She is also an alum of Dalhousie's department of Philosophy.

Watch the recording of the 2022 event

Video recording of the Stanfield Conversation