Dal.ca Home
Faculty of Agriculture
Home
We Are Agriculture
Our Students
Patrick Belliveau

From the Maritimes to Vancouver, BC, Dal AC student Patrick Belliveau travelled from coast to coast for an experience like no other. Patrick, majoring in aquaculture, moved west to Vancouver Island last summer to gain hands on work experience by working on a west coast fish farm.

“During the winter term, several large aquaculture companies come to the school for recruitment,” Patrick explains. “I was hired as a summer student by Cermaq Canada.” 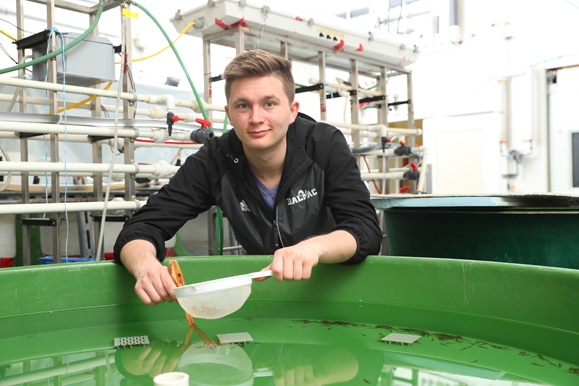 Located in British Colombia, Cermaq Canada is the second largest producer of Atlantic salmon in Canada. Cermaq Canada is a branch of the international salmon farming organization Cermaq, which has operations in Canada, Chile, and Norway. Cermaq Canada farms Atlantic salmon on 28 sea sites on both the west and east coasts of Vancouver Island. They also operate four land-based hatcheries and two processing plants. Cermaq Canada operates on salt water cage sites that are typically anywhere from a 20 minutes to a three hour boat ride away from the nearest town. The site that Patrick worked from was about an hour boat ride from the town of Tofino.

“The area is beautiful and I saw a variety of whales, orcas, seals, sea lions, and dolphins on a fairly regular basis,” Patrick explains. “I would live on the site for eight days, then have six days off.”

Working with a team for ten hours each day eight days straight at a time, Patrick became close with the team that he worked with; something that was necessary for their success. A typical day for the team started with early morning water quality checks. Patrick explains that the rearing water is checked for oxygen, temperature, and any phytoplankton (microscopic organisms) that may be harmful to fish. Once the checks are complete, the feeding begins. Atlantic salmon are fed pellets which are blown into each cage. In addition to daily duties, Patrick explains that monthly practices include safety checks, weight and length samples, sea lice counts, cleaning cameras, changing lights, and maintaining air diffusers.

“I had the opportunity to work on a site that was ready for harvest as well as spend a week with the fish health department,” Patrick explains. “Working in the fish health department involved travelling to different sites and diagnosing mortalities. With farms as large as 700,000 fish, it’s common to have a few mortalities per day. I enjoyed the diagnostic portion as well as seeing how different sites operated.”

Patrick will be returning to Cermaq Canada this summer as a full fish health technician. He is thrilled to be returning and to have so many different opportunities at his fingertips through his aquaculture studies. He explains that he first became interested in aquaculture through a friend.

“My friend Ryland had always had a keen interest in the field,” Patrick explains. “I guess a bit of it rubbed off! The aquaculture department head, Jim Duston, also does several guest lectures during first year classes. He’s a very entertaining lecturer and does a good job promoting his department. The program’s high success rate of employed graduates is also appealing.”

Originally from Sussex, New Brunswick, Patrick chose to study at Dal AC for the hands-on learning opportunities and the level of technology that students have full access to. The hands-on learning experience has proven to be his favorite thing about studying at Dal AC.

“The AC is by far one of the best campuses for hands-on experience,” Patrick says. “We have a fully operating aquaculture system right next to our classrooms. You get the hands on experience that is so useful out in the workplace. It’s a very small community too, and the small class sizes are nice so you can get extra help from professors if needed.”

In his spare time, Patrick plays soccer on the men’s varsity soccer team and plays ultimate Frisbee with a club. He explains that he enjoys trying new things, and has played in the rugby 7’s tournament in previous years.

“I really just got involved due to word of mouth from my friends and a desire to try new things,” Patrick explains. “For such a small campus, it’s amazing how many activities are always going on.”

As Patrick wraps up his studies and prepares to graduate this spring, he plans to go back to Cermaq Canada to work. While he has no defined plans for the future, Patrick would like to continue his education at some point.

“I’m definitely interested in continuing my education,” Patrick says. “I’m just not entirely sure how that will manifest yet. Life has a funny way of doing its own thing.”

As for his choice to study aquaculture, Patrick has no regrets. His journey has led him to the other side of the country and back again and he’s learned a lot along the way. He looks forward to what’s in store for him and encourages other students to explore aquaculture and the opportunities it can offer.

“Aquaculture if definitely for someone who likes to get their hands dirty,” Patrick says. “If you’re looking for a program that has jobs, this is easily the one. The industry has a huge deficit of educated individuals in the field. It’s an incredible, fun program with amazing instructors.”