A Conversation with Dr. Steve Shirtliffe

I’m a professor here at the University of Saskatchewan, and have been here since 1998. I grew up on a grain and oilseed farm in Manitoba. I’ve been doing organic research here since 2000-2001, and I refer to myself as a weedy agronomist. My specialty is looking at ways of controlling weeds using agronomic, as opposed to pesticide, methods. Part of my program is organic, while the other part of my program is essentially, in many cases, using tools, techniques or methods that many people would consider organic in nature to control weeds in other systems, such as controlling herbicide resistant weeds or weeds where there are no pesticides available.

Can you briefly explain your Research Activities in Organic Science Cluster II (OSCII)?

Let’s start with Activity C.33, the flax intercrop project. This activity is looking at novel ways of growing flax, which is a real challenge as an organic crop because it is not very competitive at all. It’s a short crop, and it produces these tiny little leaves that don’t shade out much light, so it has a real problem with weeds. In this research we’re actually evaluating a method that a grower suggested to us that they use for organic flax production, which is using a fall rye cover crop that is seeded in the spring between the rows of flax. The idea is that the fall rye cover crop needs to have a cold period for it to vernalize (switch from vegetative to reproductive), so if we seed it later in the spring, the fall rye won’t get cold, so it won’t vernalize and will stay low to the ground and shade out the weeds, and the flax can grow up in between it. We’re comparing fall rye with some other winter cereals, we’re also looking at winter oats and winter wheat, to see if fall rye is the best. And, we’re also comparing the intercrop to mechanical weed control, which we’re doing a lot of work with as well, looking at inter-row cultivation and rotary hoeing as methods of weed control. 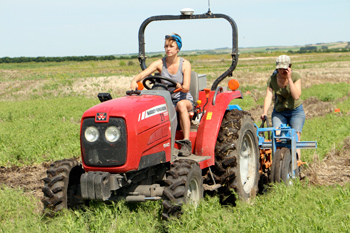 In Activity C.32, we’re trying to optimize mechanical weed control for organic pulse production. Pulses are food legumes, and we’re looking at lentil and pea. We’ve looked at quite a few tools for in-crop weed management in pulse crops: I’ve looked at in-crop harrowing with Eric Johnson, we’re also looking at rotary hoeing, and now we’ve started to look at inter-row cultivation, which is the focus of a graduate student, Katherine Stanley, as part of this OSCII project. So, the first part of the project is looking at inter-row cultivation and essentially figuring out what’s the optimum timing in terms of crop tolerance and weed control. The second part of the project will actually start to compare the different types of mechanical weed control. This really stems from a question that I always get from farmers who say “You know, you’ve talked about a rotary hoe, you’ve talked about a weeding harrow, you’ve talked about inter-row cultivation. If you had to pick one machine, which one would you pick?” And I’m always humming and hawing and I don’t really know what to say, because we’ve never really compared them to each other. So, that’s what we’re going to be doing, we’re going to compare them to each other and in combination. We may end up saying that if you have a rotary hoe, you also need an inter-row cultivator to make it really work well. Or maybe something else, we don’t know the results yet! It’s all very practical, kind of seat of the pants agronomy stuff, which we tend to get really good feedback about when we go to producer meetings - there’s a strong demand for this information out there.

What brought you to this research, and what excites you the most about these projects?

The farmers really brought me to this. And, my interest in non-herbicidal weed control - people always doubt its efficacy. A lot of people call it integrated weed management, but I don’t call it that anymore, because I think that tends to put most farmers off of it. I call it using our agronomy to control weeds, because every farmer changes their agronomy.

So what brought me to it? It’s an interest of mine. I guess I like weeds to a certain extent. I don’t like working with herbicides, maybe somewhat philosophically, and somewhat because it’s really boring research since usually they work really well, it’s too easy. I always refer to organic weed control as the double black diamond slope of weed control. Sometimes there’s big wrecks, but it can be very satisfying when you get it right. In previous research we did with Dilshan Benaragama in the first Organic Science Cluster, we were able to demonstrate that just by doing three things in oats – by increasing seeding rate, by harrowing, and by using a more competitive cultivar, we were able to reduce weed biomass by 70% averaged over four years. The cool thing about that was that our check treatment wasn’t a dog treatment, it was already good, standard agronomy. To register an herbicide for control, you need 80% control, and we were looking at 70% control without using an herbicide, which got us really excited that this can really work. Going out to producer meetings, it’s just phenomenal the response that’s out there, I find it overwhelming almost, farmers are so curious for this kind of information.

The main project, we’re still working on to be perfectly honest. Dilshan Benaragama, as part of his PhD, is looking at the Scott long term rotation, the Alternative Crop Production System Trial, which has an organic component where we’re looking at the dynamics of weed populations over time. When the trial was started (it’s actually over now, but it went through three cycles of six years each and ran for 18 years as a result), everyone was predicting that the organic rotation would fail because of weeds. But, that wasn’t true.

So, what we’re trying to figure out is how the dynamics in the organic system change over time. And we’ve figured out that moisture is a large driver. We’ve also looked at one aspect in depth, which is how much do weeds really affect the yield of organic crop production. It seems, in that rotation at least, that weeds aren’t the main limitation in terms of productivity. Instead, it appears that longer term soil fertility issues are what’s hurting the yield production in the organic system. We went in and hand weeded small plots and then hand weeded and added uniform weed densities in others. Even when we removed all of the weeds, the yields still were not up as high as we were hoping. We have a growth chamber experiment that we’re going be publishing that addresses that as well.

There’s a lesson in there, especially for western organic growers, that in the long term, export-based organic systems are going to suffer large reductions in productivity unless issues, especially with phosphorus, are dealt with. You can’t just keep exporting phosphorus off of the soil. There’s so little integration of livestock production and manure application, and our soils are calcareous, so rock phosphate doesn’t really work. There’s nothing magic about organic, you’re eventually going to run your soluble phosphate levels down to a very low level that will really limit productivity of that land.

Where are your projects taking place?

They are on organic farms. We run two locations with all of our trials, because we’ve found that, with agronomy, more site-years is better. If we can run two sites a year, then we have twice as much data every year, and I’m much more confident with our data. So, we run one trial on research farm land here. We’re not certified organic - because of the parcels of land it would be hard to maintain the buffer zones necessary – but, the land has been organically managed for 10 years plus. We also rent land from an organic farmer to use another location.

Well, you know, weeds are a big issue! Weeds and phosphorus are the two big production issues.

Well, I stole the ideas from farmers! [Chuckles] I kind of rely on that iterative process of developing research from farmers’ ideas. We’re starting a new relationship with a farmer this year, where he’s going to be essentially doing some of what we do, but on a larger basis, so we’re hoping to field test with him. I try to keep the organic part of my research program very producer focused.

Right now, there’s Dilshan Benaragama who’s working on his Ph.D. and Katherine Stanley working on her Masters, and I’m hoping to find a couple more students that will be involved. I also have a former student who is now a research associate. We hire about three or four undergraduate summer students every year. I might be having a Masters student from France coming over and working on part of the Cluster this year. So, there are lots of young minds involved!

For more information on Steve Shirtliffe’s work in OSCII, please visit the Activity C.32 and Activity C.33 pages at http://www.dal.ca/oacc. A print-friendly version of this article is available here [PDF - 394 kB].