I grew up in southwestern Saskatchewan. I was a city girl, the daughter of a man who grew up on a farm. My dad always wished he could go back to farming, so I had a strong interest in agriculture as well. I worked as a summer student at the AAFC Research Centre in Swift Current during my university years and became intrigued by plant breeding, so I studied Plant Breeding and Genetics. I have been employed as an Oat Breeder with AAFC since July 1998, and am currently working out of the Brandon Research Centre, in Brandon, Manitoba.

Can you briefly explain your Research Activity in Organic Science Cluster II?

I am developing oat breeding lines that can be selected under organically managed testing conditions, with the final objective being the development of oat cultivars uniquely suited to organic production systems. We have been making crosses between good performing lines and testing the progeny/children from those crosses under organic management as well as under conventional management since 2002.

I mostly follow a bulk breeding method, where a plot (a small block of plants, about 3-4 m2 in size containing about 1200 plants) is grown for one population, or the progeny from one cross. The plumpest seed from one population is used to plant a similar plot the following year, and the same process is repeated until six cycles are completed. During the 6th year, panicles (heads) are collected from individual plants within each population. The panicles are threshed individually, the seed is inspected visually for plumpness, good color and general health, and the seed from 50 to 100 panicles is sent to the winter nursery in New Zealand for increase. 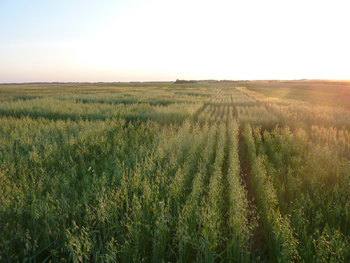 All of the increased lines that are robust-looking, lodging resistant, and disease free in New Zealand are harvested and returned to Canada. These selected lines are entered into a yield trial with a single replication grown in three or four locations under both organic and conventional management, and are also entered into disease nurseries in Manitoba to be screened for resistance to smut, oat crown rust and oat stem rust. The lines that perform the best in the trials (for example: early maturity, resistance to lodging, high yield and good rust resistance) are selected for evaluation of end use quality, including percent oil, percent protein, percent hull and betaglucan. The best lines in this group are then entered into a multiple replication, multiple location trial that is grown at organically managed sites across western Canada under contract. The industry partner funding helps to pay for these trials.

The one or two lines that perform best in this trial (for agronomics, disease resistance and end-use quality) may be entered into the Western Cooperative Oat Registration Trial. This trial is where lines that perform well can be considered for registration by the Canadian Food Inspection Agency and sold for production in Canada.

This whole process can take about 11 to 13 years, plus two or three more years for production of certified seed. So, changes or improvements that I bring into the program today may not be available in a cultivar for another 15 years.

What brought you to this research, and what excites you the most about this project?

I became involved in this research through the interest of Drs. Martin Entz and Stephen Fox, who developed the initial ideas over coffee. I stayed with breeding organic oat cultivars because the millers and end-users are extremely interested in organic oat products for consumers. I look forward to providing producers, end-users and consumers with cultivars that specifically suit their needs.

It has also been interesting to connect with the Participatory Breeding project. In this project, producers are given oat breeding lines to grow on their own farms and select the lines they believe will perform the best. It will be exciting to see how their selections perform.

It was exciting that our group was able to produce the first organically developed oat cultivar in Canada, AAC Oravena during the first Organic Science Cluster.

My current research activity has expanded to include AAC Oravena and other advanced, organically developed breeding lines as parents in my breeding program. I am expecting there will be continued improvements in the cultivars to be developed.

Where is your project taking place?

My breeding program was recently relocated from the AAFC Cereal Research Centre in Winnipeg to the Research Centre in Brandon, Manitoba. The work occurs in the greenhouse or growth cabinet for crossing and in the field for the evaluation of the breeding lines. The early generation breeding lines are evaluated mainly on the organically managed land at the University of Manitoba Ian N. Morrison Research Farm, Carman, MB. The advanced breeding lines are being evaluated on organically managed sites across western Canada.

I envision this research activity will provide organic producers in Canada with oat cultivars that have been developed specifically to show superior performance under organic management. These cultivars will have good disease resistance and superior milling quality and will be readily accepted by processors, millers and end-users. 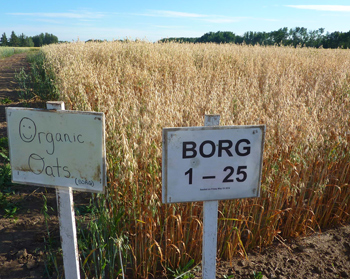 The industry partners have shaped my research through their willingness to support the project financially. Their financial input proved that the organic oat breeding project was important.

The organic community has been beneficial in telling me what traits are of importance to their production systems. It takes 13 to 15 years from making the cross to having a cultivar in the producers’ hands. Although it may appear like no progress has been made, eventually the suggested improvements may become a reality. The organic community will also be the final testing ground for AAC Oravena and future organically developed cultivars. If those cultivars don’t perform as the producers expect and need, their “cultivar lives” will be short!