Posted by stephanie rogers on December 8, 2016 in News

The Young Alumni Achievement Award recognizes the outstanding achievements of Faculty of Agriculture alumni aged 40 and younger. Alumni are recognized for outstanding achievement that may have earned them regional, national or international prominence through service to humanity in their profession or volunteer organizations, through community service or the advancement of knowledge and service to the Faculty of Agriculture.

The amount of work that David and Sara Simmons have put into their dairy farm, so early in their careers, is remarkable. They’ve started from the bottom and worked their way up. With dedication, patience and support from their family and friends, David and Sara have worked tirelessly in an upward battle to become what they are today – outstanding young farmers. 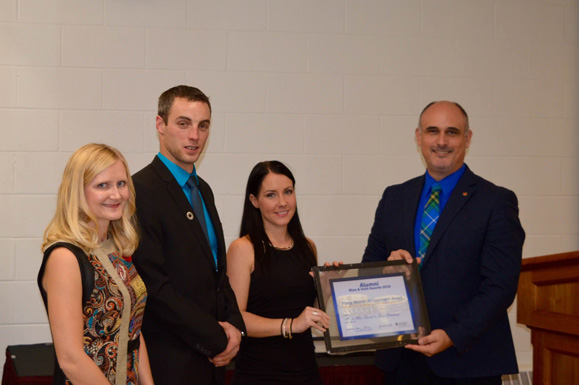 David and Sara own Pure Holsteins Ltd., a dairy farm based in Little Rapids, Newfoundland. They milk 100 cows, have 85 heifers and lease 60 acres of pasture from Hammond Farm, owned by David’s family. Not only do they have dairy cows to generate a profit, they have cows for pleasure as well. They have remarkable genetics in their herd that allows them to show their cows.

“We take pride in the genetics of our herd,” David explains. “We’ve had animals place in the top 10 at the Royal and at the World Dairy Expo.”

“We both knew we would be involved in farming,” David explains. “Sara knew she would be a dairy farmer since she was three years old. I thought I might be more involved in layers or broilers as my father was a poultry farmer but that changed when I met Sara.”

Together, David and Sara purchased all dairy equipment from Hammond Farm in October 2011. Since then, they have been working hard to add more livestock, purchase more quota and improve the productivity of their operation.

In increasing their productivity, Sara and David recently purchased two Lely A4 Robots- machines that will milk the cows automatically. The first of its kind in Newfoundland, the machines have stalls on the outside of them so when a cow is ready to be milked, she moves into the stall. An identification collar around her neck keeps track of her milking schedule and her health information. If the robot detects the cow isn’t ready to be milked, it will encourage her to leave the stall and prepare for the next cow.

When a cow is in the stall ready to be milked, an automated arm moves in cleaning and disinfecting her udder. The cow is fed grain while she is being milked. A 3D camera detects her teats and the inflations are attached to her udder. During the milking, the robot records information about the cow. It records her weight, temperature of the milk, ketone levels of the milk and somatic cell counts. This information is monitored every day and is a proactive measure to keeping the cows healthy. Each cow takes about five minutes to milk. Once she is milked, she moves out of the stall and the robot disinfects and prepares for the next cow to enter.

Although the milking process is completely automatic, David isn’t entirely off the hook. If something were to go wrong, the robot calls David on his cellphone to alert him of the problem. The robotic milker operates 24 hours a day, seven days a week. David and Sara check the cows every morning and night to see if there are any that need to be put in the robot for milking.

“The robots have allowed us to have more free time,” Sara explains. “With the robots doing the milking, we don’t have to be up at 4:30 am to milk. We aren’t tied down as much.”

Pure Holsteins would not have been able to purchase the robots without some additional funding. Under the Growing Forward 2 Innovation Fund, they received $345,000 from the Federal and Provincial Governments. The company also received $40,000 from the Provincial Agrifoods Assistance Program.

It’s not just Sara and David who spend much of their time around the farm. At the age of four, their daughter Felicity loves helping out as much as she can on the farm.

“Felicity loves being involved with the daily chores and spending time with the cows,” David explains. “Farming with our family is important to us because we love it, it’s not just a job. You become a much closer family working together every day.”

Farming always has its challenges though. Sara explains that the farm wouldn’t be where it is today without having encountered and overcame the challenges they were faced with.

“Starting a business is challenging in itself,” Sara explains. “We had some growing pains, being young and inexperienced with the financial side, but they have only taught us life lessons. If something could break or go wrong we’ve seemed to have already experienced it so we are now ready for the future!”

For the Simmons’, the future looks bright.  David and Sara are now ready to purchase more quota and breed long lasting cows.

Congratulations to these outstanding young farmers! 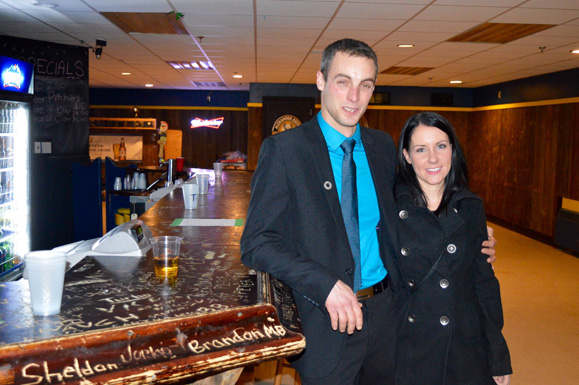 David and Sara met at the AC pub 10 years ago this past fall.