Can Haskap keep the Doctor Away?

Researchers at Dalhousie University’s Faculty of Agriculture believe what Hippocrates (460-377 B.C.), the father of medicine, stated thousands of years before, "Let thy food be thy medicine and thy medicine be thy food."

Dr. Vasantha Rupasinghe, a Canada Research Chair in Fruit Bioactives and BioProducts and his team have begun a new research initiative to investigate the disease fighting power of the newest cool climate fruit crop in Nova Scotia, Haskap.  Also known as blue honeysuckles and honeyberry, Faculty researchers and industry partner Lahave Forest Farm Ltd are developing a “super food” that may help preventing chronic disorders such as cancer if consumed daily along with other good life style practices.

Dr. Rupasinghe and his research team believe, prevention is the most cost-effective, long-term approach for controlling cancer. “There is strong scientific evidence that the natural dietary agents of fruits and vegetables have the potential to reduce the risk of cancer development by decreasing the oxidative stress,” explained Dr. Rupasinghe.

Deaths from cancer worldwide are projected to continue rising.  The World Health Organization has estimated there will be 13.1 million deaths in 2030 due to cancer. Lung cancer is one of the major types of cancer causing the most cancer death worldwide. Even after chemotherapy, survival rate after five years of identifying lung cancer is less than 14 per cent. Side effects due to lung cancer treatments are also very severe. Haskap may be the answer. 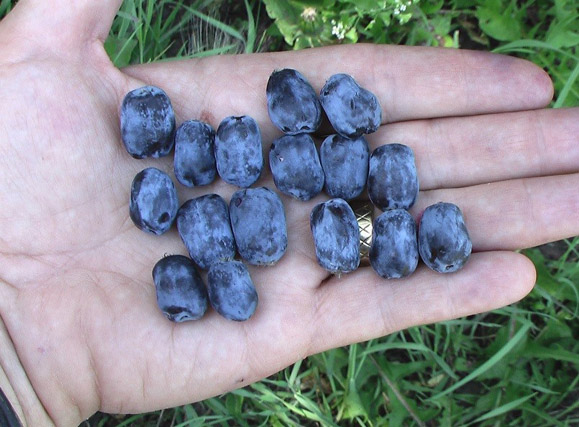 A berry crop new to Canada, Haskap is extremely rich in dietary antioxidants such as flavonoids.  Haskap fruits also have great beneficial health molecules that have been used to treat many diseases in other countries such as Northern Russia, Japan and China.

Dr. Rupasinghe and his team will assist LaHave Forests Farm Inc., to establish an optimum manufacturing process for ultimate quality retention in their new juice products. The current conventional juice process does not recover bioactives fully from the frozen berries and significantly destroys vitamins and anthocyanins. The Nova Scotia Department of Economic and Rural Development under their Productivity and Innovation Voucher program has awarded a $25,000 grant to Dr. Rupasinghe’s laboratory to develop an advanced juice manufacturing process for retaining the bioactive compounds found in fresh haskap berries with LaHave Forests Farm Inc.,

Recently, The Beatrice Hunter Cancer Research Institute (BHCRI) has also awarded a grant to one of Dr. Rupasinghe’s graduate students to investigate the chemopreventive properties of haskap. The Cancer Research Training Program (CRTP) award under the Saunders-Matthey Award for Cancer Prevention will allow graduate student Madumani (Madu) Amararathna to investigate whether exposure to haskap bioactives could prevent the cell damage caused by selected carcinogen.

“To test this, first we will use lung cells grown under laboratory conditions. Further, we will test the anticancer activity of haskap bioactives using human lung cancer cells,” explained Madu.  At a subsequent experiment, researchers will feed haskap bioactives to mice and expose them to a carcinogen while feeding a haskap bioactives supplemented diet. To test the cancer preventative ability of haskap, they will measure the size of tumors, different proteins and activities of various enzymes in mice lung tissues. “We hope that this study will help us to develop cancer preventive food products as well as educate the public about cancer preventative dietary habits,” added Dr. Rupasinghe.

LaHave Forests Farm Ltd has 60 acres of haskap orchards with plans to plant an additional  20 acres each year. The company is selling plants and encouraging other farmers in Nova Scotia and beyond to plant the berry with the vision of creating a new berry crop for the region.

Dr. Evie Kemp, Research Director of LaHave Forests Farm Ltd said “the company uses natural farming methods and the farm is organic although not yet formally accredited. The company is selling plants and encouraging other farmers in Nova Scotia and beyond to plant the berry with the vision of creating a new berry crop for the region.”

The company has started to produce a range of Haskap berry value-added products under the Haskapa brand name including juice, jam, dried berries, ice cream and more.