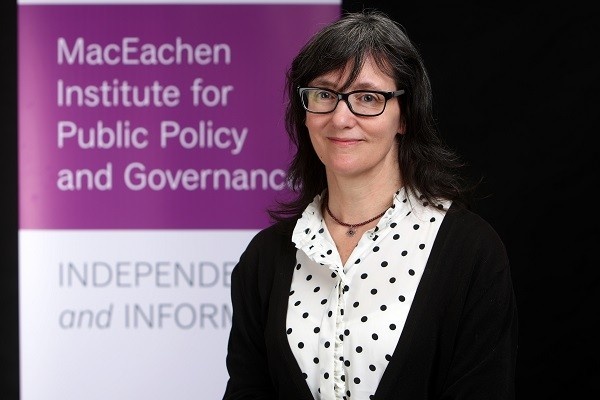 Sheila Wildeman (LLM Toronto) (MA Columbia) (LLB Dalhousie) is an Associate Professor at the Schulich School of Law.  She is a member and former Associate Director of the Dalhousie Health Law Institute and a Vice-Chair of East Coast Prison Justice Society.  Through her work with the Health Law Institute, Sheila has contributed to law and policy analysis for Nova Scotia’s Department of Health and Wellness for close to 15 years.  More generally, she has engaged in research, writing, policy analysis and community-based advocacy in support of disability rights and (more recently) prison justice. She was part of the Bill 59 Community Coalition, which won a 2017 Nova Scotia Human Rights Award for advocacy relating to provincial accessibility legislation. From 2016-2018, she worked on a project centred in Ireland, which brought together advocates, academics and policy-makers from around the world to co-create knowledge and critiques of disability-based guardianship and institutionalization.

In her own words

Policy-making involves identifying and consolidating collective interests and making decisions about how best to advance those, typically in the face of competing interests. It is therefore about the generation and distribution of knowledge, wealth and power. Policy is not, or should not be, the work of remote experts. Academics can play a critical role in supporting equitable community engagement in policy formation through university-community partnerships and other activities aimed at involving marginalized groups in the creation, evaluation and reform of law and policy.

What do you hope to accomplish during your time as a founding fellow?

My research agenda centres on a single theme: how to shift coercive and controlling law and policy responses to disability and other forms of social exclusion to responses grounded in equitable distribution of social and economic supports.  One project I aim to launch (with a community partner, the Nova Scotia Association for Community Living) while a founding fellow involves engaging co-researchers with intellectual disabilities in exploring the significance of human rights to community living, followed by our co-producing an accessible advocacy tool.