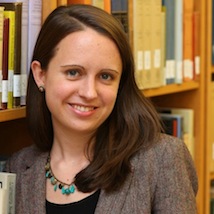 “I really appreciate what the Classics Department has given me – the breadth of the education, as well as the philosophical side. It has absolutely shaped the way I see poetry and the intent of poetry. I wouldn't be where I am or as passionate about what I’m doing if I hadn’t been at Dal.”

Talk about going out with a bang: when Emma Curran graduated in fall 2012 with her Master of Arts in Classics, she won the Governor General’s Gold Medal for being the most outstanding master’s graduate in the arts and social sciences. In fall 2013, she’s headed to Princeton to do a PhD. “There are a lot of great minds there, so I’m really excited,” she says with a smile. “And nervous.”

Originally from New Westminster, B.C., Emma was drawn to the East Coast in 2006 because of the Foundation Year Program at the University of King’s College. “And I’d never been farther east than Saskatchewan before, so kind of on a whim I decided this was the place.”

But that whim turned into a deep commitment to Classical literature.

Taking a first-year Latin course, she says, was one factor in her decision to major in Classics as an undergraduate. “I just loved what the language offered,” she explains. “As soon as I could read Latin sentences, I realized the potential the language had. Poetry has even more possibility – Latin doesn't have a strict word order, so poets can be incredibly flexible. It’s a really a beautiful language.”

From the literary to the philosophical

As did her thesis: “I looked at Golden Age imagery in Ovid’s Metamorphoses, exploring what he was doing as a philosopher as well as a poet.”

What appeals to Emma particularly is “the way Ovid plays with art and reality. He often talks about how art is as real as life. And he uses the language of art to describe reality. There are layers – which one is primary? There’s a question of whether poetry is creating the world, or vice versa. There are some deep philosophical issues there, about what role art plays in relation to reality.”

But it wasn’t all about Ovid – Emma also got in some teaching practice. “I was terrified I wouldn't be good at teaching or that I’d hate it, and I’d see my academic career crumble before my eyes,” she says. “But I really loved that part of my master’s degree – I’m really glad I had that opportunity before launching myself into a PhD. It’s all very well to love research, but you’d have a pretty miserable career if you hated teaching.”

“They do have the best professors here,” she adds. “It’s a very tight-knit group – people were looking out for me every step of the way. I wouldn't have thought of myself as an academic if they hadn’t encouraged me along the way.”