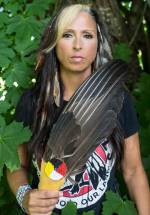 For the past 30 years, Dr. Pamela Palmater (LLM’99, JSD’09) has been a courageous and outspoken leader whose legal, social and political work has been instrumental in developing policy and legislation on issues concerning Indigenous sovereignty. Across her career she has studied, worked, volunteered and mobilized others to take action on issues of vital importance for Indigenous peoples. She is the author of several books, the most recent of which, Warrior Life, has been described as “a rallying cry for Indigenous peoples and allies alike to forge a path toward a decolonial future.”

Dr. Palmater grew up within a large family in Ugpi’ganjig/Eel River Bar First Nation in northern New Brunswick. A two-time graduate of Dalhousie’s Schulich School of Law, where she specialized in Indigenous and constitutional law, she is currently professor and chair in Indigenous Governance in the Department of Politics and Public Administration at Toronto Metropolitan University. She is also a member of the Canada Research Chair program’s College of Reviewers. Her expertise has been sought after by Canadian Parliament and the United Nations, and she is the recipient of numerous awards and honours, including the Award for Excellence in Human Rights from the Atlantic Human Rights Centre.