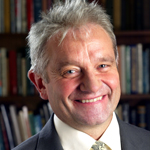 Life sometimes has a way of throwing you curve balls.

For renowned British scientist Sir Paul Nurse, that curve ball was a revelation. At the age of 57, he discovered that the woman he thought was his mother was actually his grandmother, his supposed sister was his mother, his brothers are uncles, and nephews and nieces are actually half brothers and sisters.

And then there is the delicious irony that Sir Paul -- a geneticist, and a Nobel Laureate at that -- was totally in the dark about his own genetic origins for more than half a century. The secret only came to light when the U.S. Department of Homeland Security rejected Sir Paul’s green card application on the grounds that the details on his birth certificate were insufficient. Further investigation led to the discovery that his family members were not exactly who he thought they were.

Though he was somewhat unsettled by the news, Sir Paul knew from a lifetime of scientific research that unexpected findings can lead researchers down a path to discovery—and sometimes scientists find themselves traveling down research pathways that are totally, utterly unexpected. They must look at things from new and different angles. They have to experiment and then experiment some more, and surprises should not be unexpected.

In his autobiographical sketch on Nobelprize.org, Sir Paul offers dozens of examples of his life’s surprising twists. First, there was his “upstairs/downstairs” childhood in northwest London. The family home had only three books, one being the Bible— it seemed unlikely that he’d ever go to university. Second, that a job as a technician at the local Guinness brewery between high school and university whetted his taste for experimentation and research. And third, that while doing his undergraduate degree at Birmingham University, Sir Paul came into contact with an eccentric zoology tutor who taught him the value of being open to seeing things differently; to the alternative view. As he writes, “he was hugely stimulating and entertaining, and although frequently wrong, was always wrong in an interesting way.”

After graduating from Birmingham, where he majored in biology, he went on to study at the University of East Anglia where he received his Ph.D. in cell biology/biochemistry. He completed postdoctoral studies at universities in Bern, Switzerland; Edinburgh, Scotland; and Sussex, England.

Sir Paul’s openness to the alternative view led him to examine how cells work at the molecular level. Using yeast as his model, he wanted to know how cells divide, with the hope of working out a way to understand and halt the uncontrolled growth that characterizes cancer cells.

In yeast, Sir Paul found the gene that plays an important part in controlling more than one element of the cell division cycle. The question was: could he find the corresponding gene in human cells? Indeed, he did. That gene, called CDK1, appeared to have a role at more than one point in the cell cycle.

Sir Paul has described the moment of discovery this way: “What I saw by accident was something under the microscope which I hadn’t expected, but when I saw it, it immediately made me think, what does this mean?”

Sir Paul joined the Imperial Cancer Research Fund (ICRF) in 1984. For the next four years, he headed ICRF's cell cycle control laboratory, and then spent five years at the University of Oxford to chair its department of microbiology. In 1993, he returned to ICRF (later to become Cancer Research UK) as its Director of Research; he was promoted to the post of Director General and then to Chief Executive.

In 1998, Sir Paul’s pioneering work led to him being awarded the Albert and Mary Lasker Award for Basic Medical Research. He was knighted a year later.

Over half the recipients of the Lasker Award go on to receive a Nobel Prize, which was indeed the case for Sir Paul. He was awarded the world’s top prize for science in 2001. He shares the honour with Dr. Tim Hunt who, like Sir Paul, worked at Cancer Research UK, and Professor Leland Hartwell, head of the Fred Hutchinson Cancer Research Centre in Seattle. Upon receiving the award, Sir Paul, dubbed the “David Beckham of Science” by one British newspaper, remarked that he was going to buy a new, bigger Kawasaki motorcycle with his prize money.

In 2003, Sir Paul left Cancer Research UK to embark on a new challenge: he became the president of Rockefeller University, a world-renowned centre for research and graduate education in the biomedical sciences, chemistry, bioinformatics and physics, in New York City. There, he no doubt remains open to new and alternative ways of looking at the world.

For his scientific and academic leadership and for curiosity and openness that has led to discovery, I ask you Mr. Chancellor, on behalf of Senate, to bestow upon Sir Paul Nurse, the degree of Doctor of Laws, honoris causa.