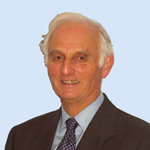 No one ever said saving the world would be easy. Sir John Houghton would agree. But, as he once said, quoting statesman Edmund Burke in an interview, “Nobody makes a greater mistake than he who does nothing because he could only do a little.”

John Houghton has spent much of his life studying the world’s changing atmosphere. And he has not done a little. He has done a lot.

Sir John is a scientist of the highest order; a leader in the study of global warming and one of the first scientists to alert us to its threat. Working with the United Nations, the British government and other international organizations, he has led research that has resulted in an overwhelming collection of evidence -- and the consensus of his peers -- describing the environmental challenges we face.

Despite the body of scientific evidence, acting on climate change remains a political battle. Sir John urges governments, corporations and individuals around the world to take action. Solid scientific reasoning forms the basis of his political advocacy. He has kept his research politically neutral and scientifically rigorous.

Sir John's commitment to the earth sciences started in his native Wales, cycling and hill-walking through the rural countryside. It was a physics teacher at the Rhyl Grammar school in Wales who fostered his inquiry into how nature works by giving young John Houghton free rein in the school laboratory.

That sense of intellectual adventure propelled him to Oxford where he eventually became a professor of atmospheric physics. Today, Sir John is an honorary scientist at the Hadley Centre for Climate Prediction and Research in Exeter, England.

Through the decades leading to this day, Sir John’s accomplishments have been many and extraordinary:

Given his accomplishments, it is perhaps not surprising that Sir John has been honored on many fronts. He was knighted in 1991, and has received gold medals from the Royal Meteorological Society and the Royal Astronomical Society. In 2006, he was awarded the prestigious Japan Prize, given to individuals who contribute to the progress of both science and peace in the world.

Sir John has published an influential collection of research, including numerous governmental reports, several books -- his Global Warming: The Complete Briefing is in its fourth edition -- and over 100 scientific papers.

His strong Christian faith complements his distinguished scientific career. His sense of spiritual responsibility to the natural world runs deep.  He calls himself a steward of the Earth.  As such, he is a founding member of the International Society for Science and Religion.

Sir John’s life work shows us that we can, and must, give our leaders every opportunity to do the right thing by arming them with the scientific truths needed to act responsibly.  His example teaches us that a scientific life is one of principle, responsibility and action. He proves to us that one person can influence profound change.

For his leadership and unwavering conviction to brilliant science in the service of a critical global cause, I ask you, Mr. Chancellor, on behalf of Senate, to bestow upon Sir John Houghton the degree of Doctor of Laws, honoris causa.