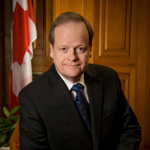 The best traditions of the bench, the legal profession and academia all come together brilliantly in the distinguished and influential career of the Honourable Mr. Justice Thomas Albert Cromwell.

Mr. Justice Cromwell’s path to the high court included many years right here – in this city, and on this campus. As an academic at the Dalhousie Law School from 1982 to 1992, he prepared a generation of lawyers who demonstrated their appreciation by awarding him a class ring in 1986; and again in 1992, when he was chosen by both the law students and the law alumni to receive their highest award for teaching excellence.

While in Nova Scotia, he helped develop the first formal Code of Ethics for judges in Canada through the Canadian Judicial Council. He served the profession of legal educators as President of the Canadian Association of Law Teachers and of the Continuing Legal Education Society of  Nova Scotia.  Mr. Justice Cromwell remained active as an arbitrator and served as vice-chair of the Labour Relations Board.

His career toward the Supreme Court continued when he became the executive legal officer for the Chief Justice of Canada from 1992-95.  He then served as a judge for 11 years with the Nova Scotia Court of Appeal, from 1997 to 2008. There, he wrote hundreds of well-reasoned and clearly-articulated decisions, earning him a reputation for legal acumen.

Today, we are particularly pleased to note that Mr. Justice Cromwell is the first Dalhousie professor to be appointed to the nation's highest court.

Throughout his varied career, Mr. Justice Cromwell has demonstrated a sustained commitment to public service, law reform and legal education.  In professional practice, he defended and exemplified the principles of impartiality and independence.  His combination of detailed academic knowledge and practical skills produced positive results for clients.

In the early 1990s, the Canadian Bar Association recognized that the traditional adversarial legal system limited accessibility for ordinary citizens and was a burden on the public purse. Mr. Justice Cromwell was instrumental in task forces that examined court reform and civil justice. As a result, courts now interpret their role as including all aspects of dispute resolution. To provide the basis for future law reform initiatives, he was a driving force behind the creation of the Canadian Forum for Civil Justice. The Canadian Bar Association recognized Mr. Justice Cromwell’s leadership with the first Louis St. Laurent Award of Excellence.

Outside the courtroom, Mr. Justice Cromwell brings a similar talent and focus to his other interests. His first class undergraduate degree from Queen’s University is in music and he studied with the Royal Conservatory of Music. For many years, he organized church music institutes and continues to be an accomplished organ player.

It was also at Queen’s University that Mr. Justice Cromwell obtained his Bachelor of Laws in 1976. While at Queen’s, he won the Gale Cup -- first prize in the Canadian Bar Association’s mooting competition. Clearly, this was a sign of the success that was to follow throughout his legal career! From Queen’s, Mr. Justice Cromwell went on to earn a first class Bachelor of Civil Law from Oxford University in 1977.

It is clear that the insight and dedication Mr. Justice Cromwell brings to the study and practice of law has already been profoundly influential. As he continues to sit on the bench of the country’s highest court, we can be assured that he will pursue justice and fairness for all.

And so, today, in recognition of his outstanding contributions to legal education and his leadership in justice and judicial reform, I ask you Mr. Chancellor, on behalf of Senate, to bestow upon The Hon Justice Thomas Cromwell the degree Doctor of Laws, honoris causa.