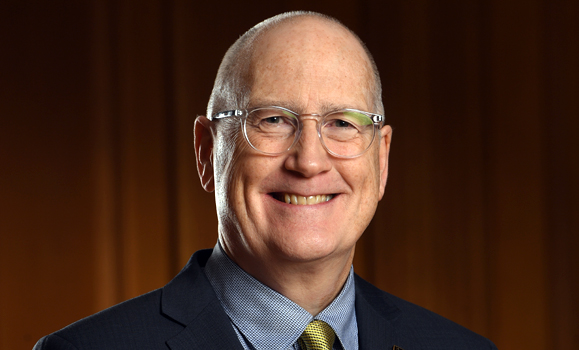 When Peter Fardy joined Dalhousie nine years ago, it was to serve as assistant vice-president, of the Office of Advancement and chief development officer. But his job would change significantly when he was asked to take on the vice-president’s role — initially on an acting basis, then permanently — and to work more closely with Dal’s president, Richard Florizone.

“Richard brought a ‘big-tent’ mentality to what we do,” Fardy says. “We’re thinking bigger, with greater ambition linked more deliberately to strategy. Dalhousie does better if we think less about what is good for Dalhousie, and more what is good for the community, society and the world, and invite other people and organizations to join in.”

Fundraising then becomes more about building partnerships with people based on shared interests, joining together to accomplish things that neither they nor the University can on their own.

“As we’re speaking with alumni, community leaders, and prospective donors, it’s always about what their issues of interest are, and how they align with the mission of the University.”

This approach frees Fardy and his team from what he calls “unnatural” conversations. “It’s unnatural to ask someone to give to something they are not already passionate about and therefore may not be fulfilling for them.”

For Fardy, who comes from a place known for its cultural authenticity, this natural approach is a good fit. He grew up in St. John’s in a family of Irish descendants. His father worked at the CBC and was transferred to Halifax in 1974, when Peter was 12. He got involved in competitive canoeing, at first as a way to make new friends. Looking back, he credits sport for a significant amount of his personal success.

“It transformed me from a shy, introverted kid to being a team player,” he says. “When I think about the leadership I’m now called on to demonstrate, it really made a big difference in terms of my self-confidence.” He went on to coach high performing athletes and later served as a long-time volunteer in the sport.

A Dal MBA graduate, he was drawn back to the university in his professional career by the scope of the challenge. His first order of business was professionalizing and scaling up fundraising to develop a top-performing team. “I knew the University well from growing up here as a teenager,” he says, “and that it was important to the community and region.”

The mandate of the Office of Advancement is to attract philanthropic support for the mission of the University, but he says that’s best accomplished when Dal’s needs are not the sole focus, but rather the alignment between donor and University goals.  “What’s fulfilling is when we can tap into what people really care about and want to accomplish, and focus on impact.”

In some cases, the Advancement team shows donors possibilities they didn’t know existed. In other cases, it’s the other way around. Fardy recalls a lunch with Chris Huskilson, then the CEO of Emera, to propose a donation of one or two million dollars for a new engineering building. “He said of course they’d fund it because the region needed it, but he said we weren’t thinking big enough.”

That conversation eventually turned into a $10-million commitment for the Emera IDEA Building and ideaHUB, an incubator and accelerator for advanced engineering students with ideas and an entrepreneurial drive. [link to https://dalinnovates.ca/programs/build/].  Similarly, philanthropists Fred and Elizabeth Fountain have been driving forces towards transformational changes in the performing arts at Dal — still a major focus for the advancement team. “The Fountains wanted us to think bigger about the kind of programming and environment students in performing arts need in order to excel.”

While big, transformative gifts naturally attract a lot of attention, Fardy recalls a donor experience that has stuck with him more than any other. “Soon after I joined Dal, I met an alumnus who, after a long discussion, fell in love with the idea of establishing a scholarship for students from his hometown.  He named it in honour of his parents, who he credited with enabling him to pursue a university education. After we finalized the gift agreement, he sent me a note thanking me for helping him accomplish something he didn’t know was available to him. I learned a lot about philanthropy from that experience and our whole team strives for that standard.”

On a daily basis, Fardy tries to focus on three big-picture items: identifying new opportunities for transformative gifts; developing and implementing a solid overall growth strategy; and helping his colleagues in Advancement succeed in their roles. “Of course, some days it feels more like playing Space Invaders,” he says, reacting to issues and opportunities as they come at you from all directions.

It’s work he takes very seriously, he says, “but taking it really seriously doesn’t mean it can’t be fun. I want to help people on our team enjoy their work.”

And in the spirit of maintaining a big-picture approach, he tries to avoid micro-managing. “I focus on outcomes. I want us to look back someday and say, ‘We were part of something big that really mattered to our community’, and keeping focus on the desired outcomes is therefore critical.”

He feels Dal is in a stronger position than it’s ever been and is focused on helping recruit an equally ambitious new president. He is working closely with Dal’s VP of research & innovation, Alice Aiken, to address new health research opportunities, and the AVP of alumni and external engagement, Sheila Blair-Reid, on engaging Dal’s more than 130,000 alumni “to identify the subset who care passionately about the same things we do, and engage them in a meaningful way.”

He is looking forward to working with new Provost Teri Balser and Vice-Provost Ivan Joseph on the most compelling opportunities related to student success, inside and outside the classroom. “Dal has demonstrated that it can help every student achieve their full potential, and donors love playing a role in that.”

On Dalhousie’s impact-oriented approach to philanthropy ...

On finding the right projects to develop and support ...

“Opportunity isn’t created; it’s uncovered or revealed. It’s there already, like the sculpture hidden in the block of stone.”

“You don’t have to choose between effectiveness and fun."

“You can’t get much done if you feel you have to do everything yourself. I try to focus more on issues where I can make the biggest difference.”

When you were a student, what was your favourite course?
"I don’t know why, but in undergrad I really enjoyed statistics and computer science in first year. In second year, I realized I wasn’t cut out for those. During my MBA, my favourite was a piece of consulting work and our client happened to be Dalhousie."

What’s your favourite hobby or pastime?
"Stand-up paddle boarding—it’s a great way for a guy of my vintage to continue in my sport. I’ll go paddling for hours when I have the time, on the Northwest Arm or on the Northumberland Strait."

What’s the best advice you’ve ever received?
“Just make sure that whatever business you’re in, you genuinely enjoy spending time with the type of people you will be dealing with. If you don’t, you’re in the wrong business.” That’s why I like my work.

Who is a mentor or leader that’s inspired you in your life or career?
I’ve had a few over the years, so it’s hard to pick one.  But what’s common among them is that they inspired me to act and think differently as a leader, gave me license to be ambitious and take risks, and backed that up by ‘taking a bullet for me’ when things don’t go right.

If you could have dinner with one person — living, deceased or fictional — who would it be and why?
I think I’d have a really interesting dinner with Newfoundland authors Wayne Johnston or Michael Crummy. They speak with genuine voices about where I’m from and what it means to be a Newfoundlander. My favourite novel is Johnston’s The Colony of Unrequited Dreams.